Since the day was designated as a "plus-30" day and the older veterans had the day off, the afternoon session was only for Special Teams' practice. As I got on the fields, I saw the teams in groups, doing drills such as blocking punts, picking up loose ballls and diving for the ball, as seen below with Tavares Gooden as the example. 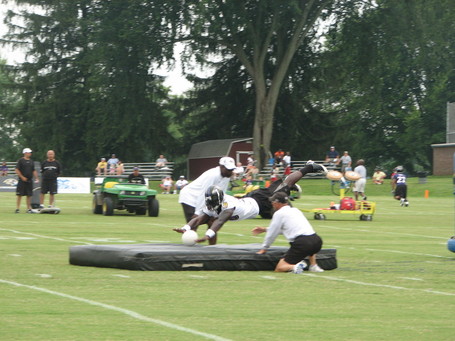 On the stairs leading to the locker room, Ray Lewis was holding court.

He was in uniform, but without pads and was joined by Todd Heap and Ravens' Media Relations Director, Chad Steele. They were surrounded by about five or six othe rmedia, so I went up to see what was going one. Ray was leading the debate on what sports were considered "athletic" and the participants as true athletes. When asked if golf''s Tiger Woods was an athlete, Ray shook his head no. He really didn't think Baltimore's own Michael Phelps was an athlete either, at least not compared to football and even basketball players, who he said were the best athletes in all of sport. So I piped in, sarcastically asking, "are you telling me that NASCAR drivers are not athletes?" to hear his response. He made a face and said, "I don't consider anything that does the work for you to be a sport." The debate then centered on how good of athletes are lacrosse and soccer players and could both football and basketball players make the switch to other sports better than vice versa. Former NFL great Jim Brown was an All-American lacrosse player at Syracuse University and reportedly once said that lacrosse was his favorite sport. However, this debate could have gone on for hours had Ray and Todd not left to go to the locker room.

Meanwhile, back on the field, punter Sam Koch was booming punts, including one from his own end zone that returner Jayson Foster let fall and it bounced all the way to the other end of the field, coming to rest on the three yard line!

As practice ended, Ray Rice was trading verbal jabs with Chad Steele, saying he wasn't afraid of Chad's last name and it should be changed to "Paper" instead.

Frank Walker and Lardarius Webb remained on the field to practice techniques on punt coverage. Evan Olglesby did not practice due to a reported mild concussion. Dawan Landry, Derrrick Martin and Antwan Barnes stayed late to sign autographs for the fans. Biron Ealy, who did not practice, was catching passes off the "pitching" machine  to stay sharp.

That's it for today.