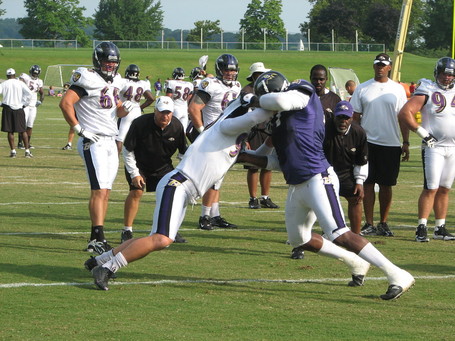 Today at the Baltimore Ravens Training Camp, it's obviously another "plus-30" day, which means all players over the age of 30 have the day off. Only center Matt Birk is around the fields, dressed in shorts. 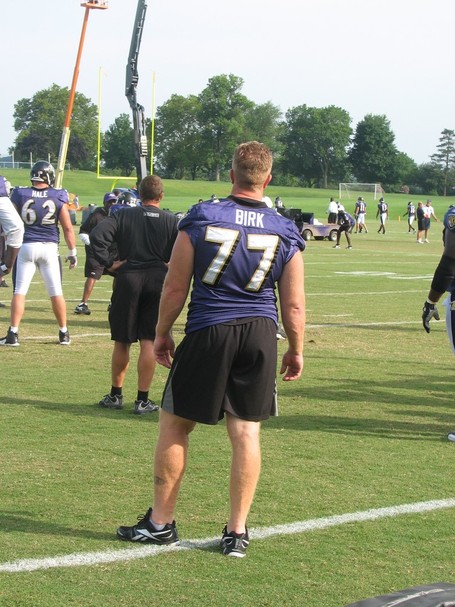 In passing drills, the QB's are throwing long soft tosses to the WR's, while the OL is drilling one-on-one with the linebackers. LT Jared Gaither is going up against rookie LB Paul Kruger and is throwing him around. Oniel Cousins, whose role should expand significantly with the loss of Adam Terry for the season, is holding his own. Here is a nice matchup, 1st round draft pick, RT Michael Oher, versus 2nd round draft pick, Kruger. Oher is winning this battle, but is not dominating Kruger the way that Gaither was. 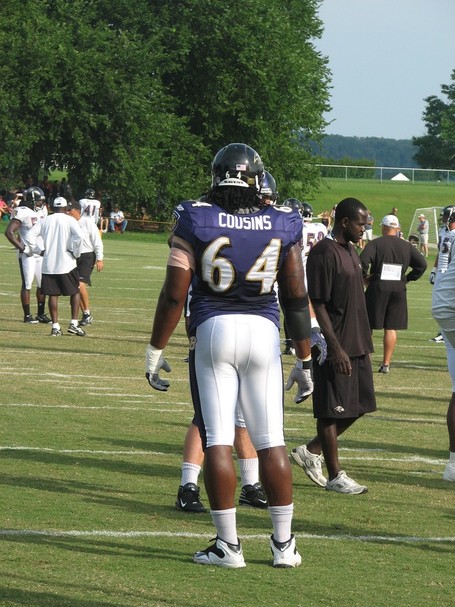 In 11-on11 drills, QB Joe Flacco swings a pass to Ray Rice, who hustles downfield for a nice gain. Next he hits Demetrius Williams over the middle on a quick hit in front of Frank Walker. A handoff up the middle to FB LeRon McClain nets a couple of yards at most. Flacco throws a screen pass to McClain in the flat that fooled the defense as Joe looked them to his right before throwing left.

Note: In Ed Reed's absence, Haruki Nakamura is teamed up at safety with Dawan Landry for the 1st team defense.

Troy Smith runs a bootleg but is met in the backfield by LB Paul Kruger. 3rd string QB John Beck completes a long pass down the sidelines to WR Justin Harper but it is caught five yards out of bounds.

Interestingly, the offense is now running three complete groups simultaneously moving downfield play-by-play at the 30, 50 and 30 yards lines. They keep moving until they run out of field, turn around and do the same thing the opposite direction, and it all looks very efficient.

Back to 11-on-11 drills: Long pass incomplete to D-Will, broken up by Frank Walker, and Williams stays on the ground for a few moments and gets up slowly. As the practice continues, he looks fine so no worries. Troy Smith's pass over the middle to WR Ernie Wheelwright glances off his fingertips and is picked by Derrick Martin. One of the better all around plays of the day has Nakamura blitzing up the middle but he is picked up nicely by Ray Rice, giving Flacco the time to find D-Will over the middle for a completion, even though he was guarded closely by Domonique Foxworth. 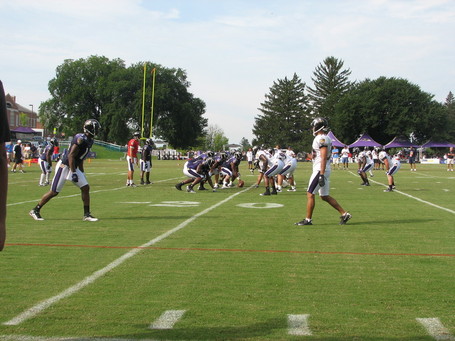 The kicking competition is still neck-and-neck, with Graham Gano hitting from 51 yards and Steven Hauschka from 45 yards. Hauschka then lined up with the kicking team and consecutively nailed his attempts from 28, 32, 40, 45, 50 and finally 55 yards. This competition will obviously go down to the wire. 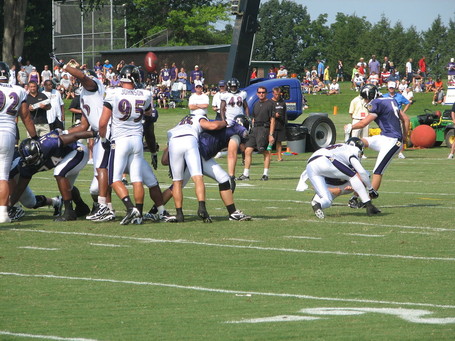