Share All sharing options for: Does Mason's Return Actually Make Us Better? 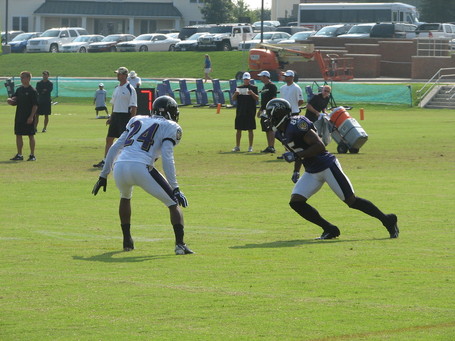 This is the question that I am posing to everyone today. I'm sure that an overwhelming majority will just laugh at this headline and vote yes. Of course, Derrick Mason makes us a better team, as he was the team's leading receiver since he got here and had over 1,000 receiving yards, and was among the league leaders in receptions. Without Mason, our only receiver with any legitimate production was Mark Clayton, who had 41 catches and five TD's in 2008. Other than that, the trio of Demetrius Williams, Marcus Smith and Justin Harper were virtually and statistically invisible last season.

But then how do I even attempt to convince you that all might not be wonderful now that Mason is returning for the 2009 season? Now before you boo and laugh me off my soapbox, hear me out on this. With Mason and Clayton in the first two receiving spots, we know that they will catch an overwelming majority of passes from Flacco this season. No matter who plays as the slot or third receiver, much less the fourth or fifth, they won't make anywhere near the contributions of the first two. My issue and point centers around the "type" of receivers that both Mason and Clayton have been. While Clayton has had a few nice longer passes, bit guys are more likely to be "possession" receivers than long ball targets. Yeah, D-Will and the others might be able to break a long one now and then, but due to our 'mantra' of being a run-first offense, how many times will we be looking at these types of three receiver sets?

With two receivers who bring significantly different skill sets to the line of scrimmage, the defense has to gameplan for more possibilities. If Mason had stayed "retired," our starting receiver lineup (had there been no more signings) could have been Clayton, Williams and either Harper or Smith. All three or even four bring different skills to the line each time they're on the field. We'd have a possession guy, an over-the-middle guy, and a deep burner on the field at the same time. I realize the quick response is that there is no experience with most of those names, but how do you think the Broncos fans felt when the lined up Brandon Marshall and Eddie Royal at WR as the 2008 season began. Marshall was good in 2007, but only had 20 receptions in 2006, his rookie season. Royal was a rookie from Virginia Tech, where he was a teammate of Justin Harper's, and perhaps not even the best receiver on the Hokie's. Also, look at the St. Louis Rams, where they drafted a guy named Donnie Avery out of the University of Houston, who went on to be a solid deep threat with 53 receptions for almost 700 yards and three TD's just by getting the chance for the Rams. As a college senior, he caught 91 passes, the exact same number as the Ravens' Marcus Smith caught at New Mexico that season.

The difference between Royal and Avery, as opposed to Harper and Smith? Those first two just got the chance to prove they could play in the NFL and made the most of their chances. Every Brandon Marshall and Anquan Boldin have to start somewhere with zero career NFL catches. I was believing that by the end of the 2009 season, the Ravens would have their own, new "Marshall" or "Boldin" on their roster in one of those two young guys. Now, with the return of Mason who gives us pretty much the same schemes in the passing game, the opportunities for these kids to show us what they can do will be pushed further down on the depth chart, leading them to secretly hope for an injury or other opportunity for them to be given the chance to step up.

So are we truly better now that Derrick Mason has returned to the team? While he is definitely an excellent player, I'm just not convinced the alternative might have been better in the long run for the team.

Allright, now you can start throwing stones, unless of course, you now are beginning to see my point and think I may have an interesting take on this situation.