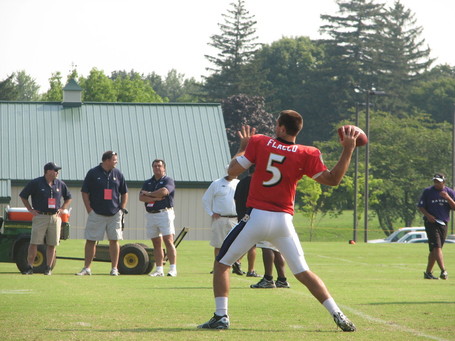 Injury Status Updates: Terrell Suggs is wearing a boot on his foot and should be okay in a few days or so. Mark Clayton tweaked his hamstring and the coaching staff just want to take it easy on him as he has been prone to those injuries. Davon Drew’s right ankle is wrapped and he is not participating, courtesy of a solid hit by LB Prescott Burgess in yesterday’s one-on-one blocking drills. Antwan Barnes suffered a mild concussion yesterday but is on the field today.

In today’s early action, in passing drills Joe Flacco looked right and threw left to Edgar Jones in the flat, who then after hesitating, ran down the sideline for a long gain. I could have sworn Jones was looking to see if LB Prescott Burgess was going to cream him like he did yesterday morning on a similar play. Next Flacco hit LeRon McClain on a swing pass for a good gain. Troy Smith hit Marcus Smith over the middle, as it was good to see Marcus out there after having issues with his fluids and cramping up the past day or so.

The 1st team defense is collapsing the 3rd team offensive line’s pocket and would have easily had a sack if it was allowed. Flacco then threw long to Demetrius Williams over Chris Carr, which drew the loudest cheers and applause from the fans in attendance. 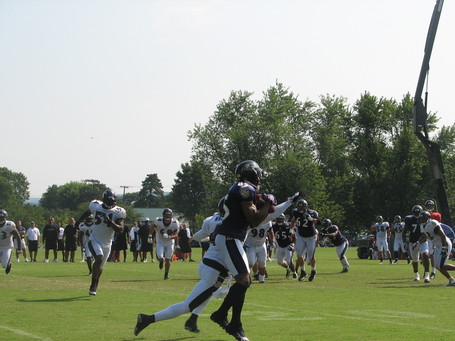 Wth Flacco throwing to his hreceivers in one-on-one drills with the defensive backs, he connected twice with Derrick Mason for TD passes. Ray Rice made a sweet one-handed grab in the end zone, which the  crowd loved. When Domonique Foxworth intercepted a pass, he yelled to the crowd, "what we make an interception, don’t we get no love? He threw the ball into the ground as the fans cheered. Todd Heap got into the action, getting by Dawan Landry for an over the shoulder TD catch. Derrick Mason and Frank Walker were jawing with each other and laughing.

Walker got up on the line against Kelly Washington but the coaches backed him off. Walker said, "he’s scared," to which Washington responded by telling him to "get back up here." The two fought for the ball in the end zone and as it fell incomplete they went helmet-to-helmet pushing and jawing to the delight of the fans as well as the players around them. The defense is starting to step it up.

Flacco hit Demetrius Williams with a nice TD pass. To celebrate, Williams ran to the goal posts, jumped on the padding and then saluting before dropping off to the laughs and cheers of the fans.

1st defense vs. 3rd offense has LB Tavares Gooden bearhugging RB Matt Lawrence then slamming him to the ground. On the next play, QB John Beck rolled right and threw right into LB Jarret Johnson’s hands for an interception.

On goal line drills, Willis McGahee ran around the right side for a TD, then proceeded to bull his way around the left side for another. Ray Rice ran up the middle but did not get in the end zone as the defense swarmed to push him back. Rice finally went airborne and over the top for the TD.

Jalen Parmele ran left but was stopped just short of the goal line and then again caught from behind.

The offense is on the sidelines yelling, "run at Ray," while Lewis yells right back, "please do it. I live for that!" 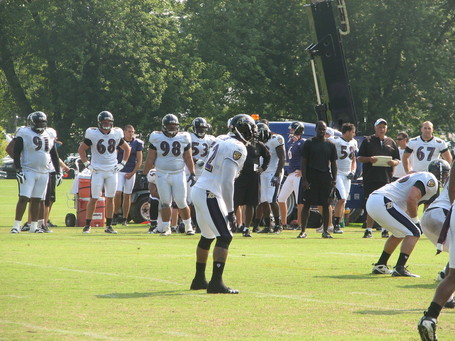 Placekicker Graham Gano lined up for field goals and hit consecutively from 20, 29, 47, 33, 45 and also 53 yards. Meanwhile LeRon McClain just squirted me with the water hose, making me wonder if it was an accident or was he just playing with me? 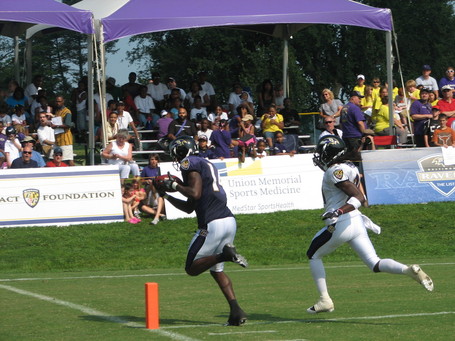 Back to passing drills. Justin Harper beats Lardarius Webb for a long 30 yard TD pass in the corner of the end zone. Marcus Smith comes over for the jump-bump to celebrate. Webb then knocks down a similar pass for D-Will. Meanwhile, Kelly Washington is very talkative, animated and enthusiastic with his teammates. Webb breaks up another pass from John Beck in the end zone, this time knocking the ball away from 6’3" Eron Riley..

McGahee just dropped a short easy pass from Flacco crossing over the middle. Perhaps he thought that the Pittsburgh Steelers’ safety Ryan Clark was there, as he was on that thunderous collision in last season’s AFC Championship Game.

Troy to Harper for a 20 yard TD pass over the middle and then Flacco to D-Will from the same distance in front of Ed Reed at the goal line. Troy hits Parmele, who is then horse-collared by Fabian Washington, although the referee on site said Parmele’s knees were already on the ground so the penalty would not have been called.

Flacco to Derrick Mason for a 10 yard TD pass but the ref ruled Mason out of bounds, drawing a cold stare from Derrick and Marcus Smith to yell at the ref, "you’re fired!" Finally, Flacco made agreat play when he couldn’t find anyone open, rolled left then right and left again before hitting a sliding D-Will for an 8 yard TD pass who had slipped away from Dawan Landry.

Back to 11-on-11 drills, where Mason catches a short sideline pass from Flacco but breaks away from Frank Walker for a long TD. Ray Rice was running a pattern away from the ball and was shoved hard by rookie LB Jason Phillips in his first action after coming off the PUP List today. On that play, Flacco rolled right and threw an interception to Haruki Nakamura, his second pick of camp. John Beck hit a nice long pass after a pump fake that was caught between Fabian Washington and Ed Reed for a 30 yard gain. Beck again, this time to Harper for 10 yards more. Then Troy came in and hit a sliding Kelly Washington on the ground, which was nice to see him involved with the offense.

A short pass to TE Isaac Smolko was popped up into the air due to a big hit by undrafted free agent LB Dannell Ellerbe, who then snatched the ball out of the air for an interception. Ed Reed was leading the cheers of "Let’s go defense!"

The afternoon session was limited to Special Teams' drills and the other players had a well deserved break from the heat. 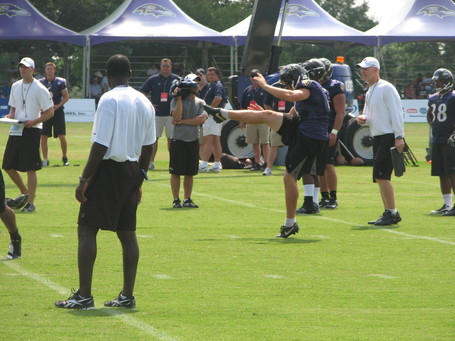 See the sidebar FanPost for my interviews with Marcus Smith, Tavares Gooden and Prescott Burgess, which should be up shortly.