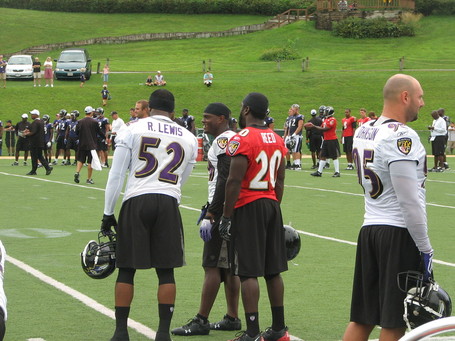 I forgot to post an 'Open Thread' for gametime commenting the last exhibition game, so today I thought I'd post it in the morning this time. Stop back here during the game to post your thoughts and comments, whether it be to summarize what you've watched or even after every play worth mentioning.

Remember that this is still a pre-season game, and although the starters are aiming to play most, if not all of the first half, the coaches will not be giving anything away from what we will be "unveiling" when the games count. More than likely, both Ray Lewis and Ed Reed will not play through the second quarters along with the rest of their teammates, and that is sure to make a difference with both of those stars on the sidelines. That will give our glut of linebackers more reps to sort through what will end up being some tough decisions beginning with the first round of cuts on Tuesday, September 1st.

However, that requires the team to get down to 75 players, so the major cuts will not happen until next weekend when the team must get down to their opening day roster of 53 players. Occasionally, the team grants a player a better chance to latch on with another team by releasing them in the early cut, but at the same time, they might hope to stash that player on the Practice Squad for a possible future call up in the event of an injury.

Our linebacker group is so deep that it is conceivable that just about every one could start for another NFL team and will be snatch up as soon as they are released. We still have depth at cornerback, but the quality of depth may not be such that we would still be comfortable using them all at the same time like we have during the latter parts of these exhibition games. Luckily, that shouldn't happen during the regular season unless we are devastated like we were in 2007 at that position. So the concerns that many Ravens fans had about our secondary during the last game should just be an example of what these meaningless outcomes are at this time of the year.

Watch the kicking game which should more than likely play itself out to a final decision after this game. Second year kicker, Steven Hauschka, seems to have a decent advantage going into this game and unless he totally blows every shot while rookie Graham Gano hits a few real long ones, he should win this job for the regular season.

Other than that, you could prabably go through the roster to check off the remainder of guys who are secure in their jobs, with the positions I mentioned being the biggest question marks in finalizing who gets to wear the purple and black in September or who goes looking for another job.