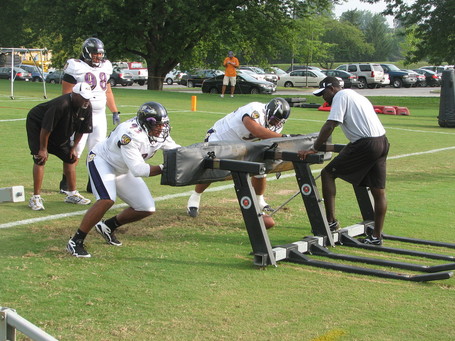 Back out to the sweltering heat after an emotionally fueled Wednesday afternoon practice hightlighted by the team's salute to  our troops as part of Media Appreciation Day. After today's practice session, I interviewed reserve linebacker, Tony Fein, who was in the military prior to joining the Ravens. My interview with him will post later today as a FanPost.

Today is another "plus-30 day, giving some of the backups a better chance of getting additional reps on the depth chart. The offensive and defensive lines start out working on the blocking sleds. Watch out that you don't get run over as they move it backwards like it weighs next to nothing!

On double-team drills, rookie LB Paul Kruger fights off a pair of blockers, drawing loud praise from Defensive Coordinator Greg Mattison. Next it looks like the offensive line is having their way with blocking. However, newcomer defensive tackle Nader Abdullah fights off a double-team from Jared Gaither and Oniel Cousins to make the tackle, earning praise and a hug from Defensive Line Coach, Clarence Brooks. On goal line drills, Fabian Washington goes to the sideline, saying, " that ain't me!" D-Line Coach Brooks says, "you never know, we might have to put you in there," to which Washington responds, "don't know what I'd do." Brooks deadpans right back at him, "lie down, maybe they'll trip over you!" to laughs from the players gathered around.

11-on-11 Drills: Flacco's quick dump pass goes right into the outstretched hands of a leaping Jarret Johnson for the interception. Flacco comes right back and hits Kelley Washington on a quick slant with Ray Rice, who lined up as a wideout, blocking for him.

Former Raven and soon-to-be Pro Football Hall of Famer Jonathan Ogden shows up to sit in the crowd with his family holding his son on his lap to watch practice. 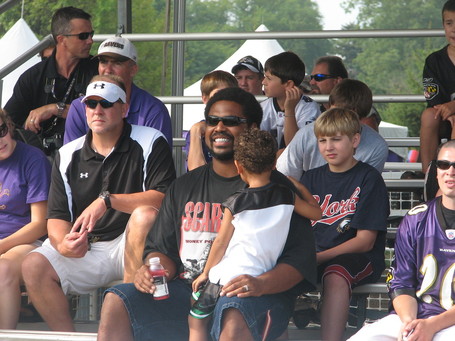 Goal line offense: Flacco fakes a dive to Rice then lofts a TD pass to a wide open L.J. Smith., Next, Rice bursts up the middle for a touchdown. Jalen Parmele beats Derrick Martin to the pylon for a TD but then Cedric Peerman is stuffed by the defensive line and thrown back by Haloti Ngata. 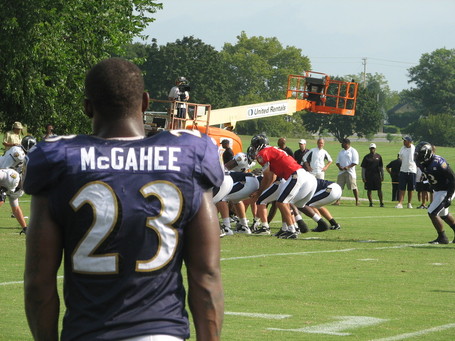 FG Time: Steven Hauschka takes all the kicks today just like Graham Gano took them all yesterday. Hauschka is good from extra point range, 39, 48, and 53 yards, but misses wide left from 42 and 53 yards. Later he hits consecutively from 46, 43, 39 and 30 yards to finish seven of nine, not including the XP. 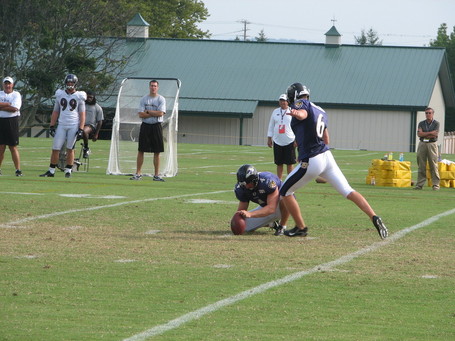 Back to 11-on-11 drills: Flacco fakes and rolls out to his right but rookie LB Paul Kruger is not fooled as he gets right into Flacco's face. Paul is getting valuable reps with the first team defense in Terrell Suggs' absence.

Ngata puts up a huge paw to bat down another Flacco pass. The heat is really getting to the players, no to mention us media. I'm sweating like crazy and wondering what it must be like for the players. Just then, I look down the line and see OT Joe Reitz on one knee yakking out his guts. He wipes off, gets up and heads right back into the mix.

Practice ends and I grab reserve LB Tony Fein for a quick interview and then wait to speak with DT Haloti Ngata about his Defensive Line Coach, Clarence Brooks, whom I've scheduled for a sit-down interview Friday after the morning practice.