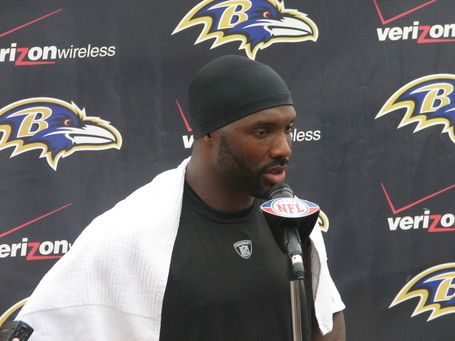 The Baltimore Ravens held their Sunday morning practice on the lower McDaniel College Bair Stadium field, due to the constant drizzle and the better field turf of the stadium. From yesterday's PM practice that I skipped, I heard that safety Dawan Landry had another interception, bringing his camp total to four picks, including three all of yesterday. He is looking lean and fast, with no effects from his season ending injury suffered last year in the Cleveland game. 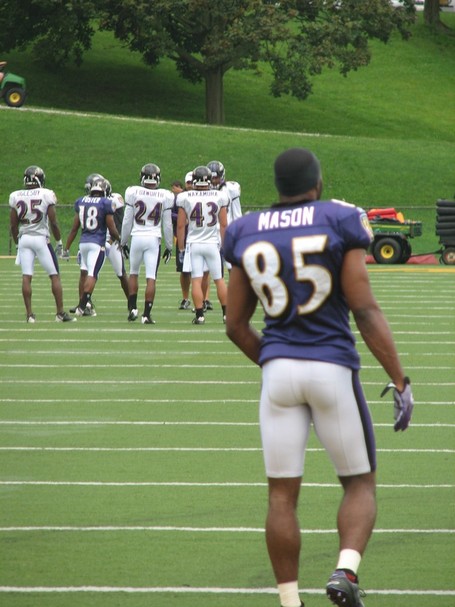 However, today is all about the return of seemingly retired veteran wide receiver Derrick Mason. Mason was all smiles and hugs as he took the practice field for the first time this Training Camp after announcing yesterday afternoon that he had reconsidered his retirement and still had a lot of football left in his 35 year old body. He spoke at the podium after practice and one of the things that he said was that Jared Gaither called him and that meant the world to him when one of your offensive linemen call to say they want you back. I asked Derrick if he heard the fans calling him. He said, "Yeah, that more than anything is what I missed. They come out every Sunday, come out here to Westminster, bring the kids, I don't know how they do it. It's hot! That applause coming down the walkway, it felt good, really good. I was looking for a marching band, though." 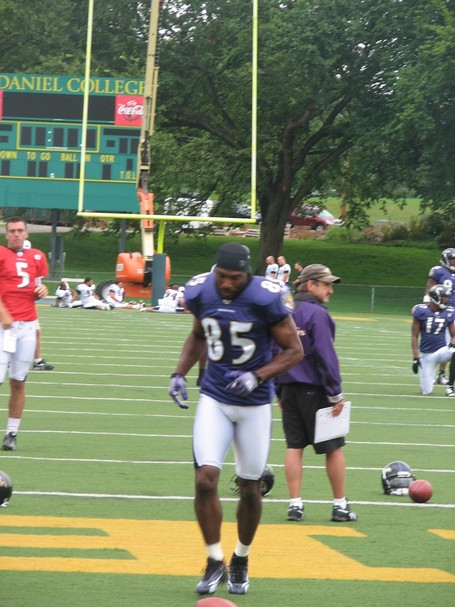 Head Coach John Harbaugh has designated today as "Plus-30 Day," which means any player over the age of 30 has the option of skipping practice to keep them fresh, of which all the guys who were eligible took the opportunity to rest.

The overcast, drizzle didn't stop the team from having the hardest hitting in camp so far, in my opinion. In one-on-one blocking drills, DE/LB Prescott Burgess just absolutely flattened rookie TE Davon Drew, who was trying to block him. Drew was put flat on his back and appeared to hurt his ankle in the process. The coaches put both back on the line for a second time, with the exact same result as Burgess bowled him over again. TE Edgar Jones blocked well, knocking down rushing LB Tavares Gooden. Ray Rice held his own against a couple of rushers.

I notice that WR Mark Clayton is getting his hamstring worked on and Harbaugh confirmed after practice that he had a twinge in it, although it did not prevent him from finishing practice.

In 11-on-11 drills, Burgess again made an impact with perhaps the hardest hit in camp so far this year, slamming TE Edgar Jones to the ground after Jones caught a swing pass and tried to elude another defender by spinning around him just as Burgess smacked him to the ground with a resounding thud that brought cheers from the fans as well as the other defensive players.

The defense seemed to have their way today with the offense, as evidenced by nice tackles after short completions by both CB Frank Walker on WR Justin Harper and safety Haruki Nakamura on FB Jason Cook.

The field goal kickers took over for a few minutes, with Steven Hauschka hitting consecutive attempts from 32, 41, 45 and 51 yards. Graham Gano also was on target from 32, 41 and 45 yards, but missed his first attempt at 51 yards, and then came back to nail his second shot at it. Still, the kicking competition to replace the legendary Matt Stover is way too close to call and will more than likely go down to the final pre season game.

In Red Zone drills from the five yard line, Troy Smith's pass to Justin Harper was bobbled which allowed CB Lardarius Webb to grab his first pick as a Raven in the end zone and race out. Flacco hit Derrick Mason with a TD pass from the five yard line on a crossing pattern and then rolled out but threw an interception to Nakamura who leaped to snag it in the end zone before falling to the ground.

LeRon McClain was seen limping down the field favoring his right leg but later was fully involved in drills without any noticeable effects. Flacco put a nice touch on the ball down the sideline over a leaping defender softly into the arms of Demetrius Williams. K.J. Gerard got his first career interception and almost didn't know what to do with the ball, but then raced down the sidelines to the end zone.

Rookie RT Michael Oher was "called" for a false start by the referees on site, prompting Terrell Suggs, standing on the sidelines, to call him out, yelling, "we see you, rook!"

Derrick Mason made a nice sliding catch of a Flacco 16 yard pass for a first down on what was a third and ten.

Terrell Suggs and Haruki Nakamura playfully pushing each other between plays, then Suggs respectfully "bows" to Haruki, apparently to acknowledge his Japanese heritage.

See my FanPost for a short interview with LB Jameel McClain, who is vying with fellow second year LB Tavares Gooden, to replace the departed Bart Scott and line up next ot Ray Lewis at one of the two inside LB slots.