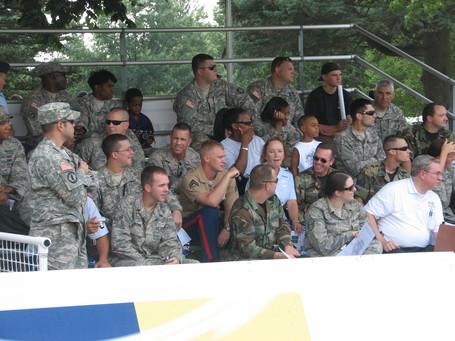 Today at the Baltimore Ravens Training Camp, it was known as 'Military Appreciation Day.' All members of the Armed Forces that wore their uniforms were given priority seating around the field and there looked to be a few hundred men and women in uniform, along with lots of proud family members as well.

Baltimore Ravens Head Coach John Harbaugh, who took a trip to Iraq and Afghanistan earlier this summer, wore his army cap in honor of the men and women who so selflessly serve the country. 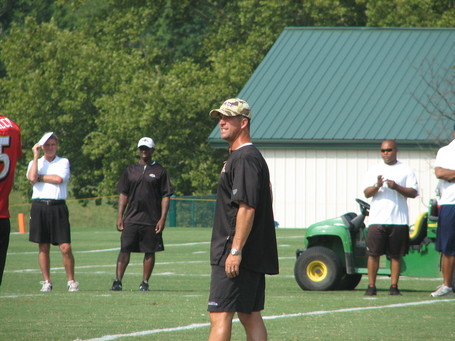 It was good to see Demetrius Willimas taking part in practice with what appeared to be no limitations. On the other hand, I see both Terrell Suggs and Mark Clayton working on the other field, Suggs walking and jogging from sideline to sideline while Clayton catches passes from an assistant, testing that sore hamstring. 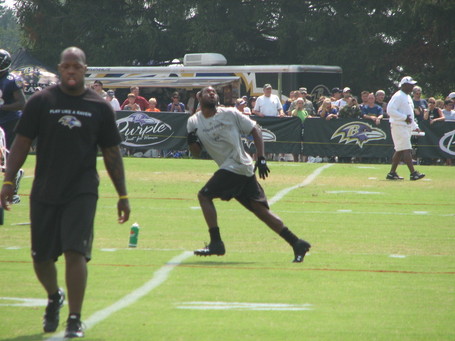 As th defense moves from the far field to the one close to the where most of the fans sit, Ray Lewis' arrival brings loud applause and cheers. Ed Reed is wearing a red (no contact) jersey today, but it is probably more due to taking it easy than anything else. I see a receiver with a #9 jersey without a name on it, but it turns out that it's Derrick Mason just honoring his late friend, Steve McNair. 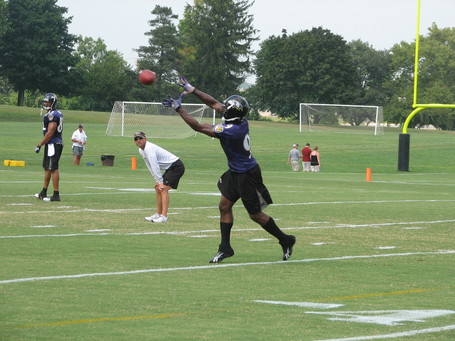 Derrick Williams is in on a lot of the passing plays and it seems the QB's are targeting him, perhaps to make up for lost time recently. Jusitn Harper beats Ed Reed for a long TD pass. Yes, Ed Reed bit on the fake! Kelley Washington does the exact same thing to Frank Walker. D-Mase fakes Fabian Washington long then puts on the brakes for a sweet sideline reception, prompting Washington to admit, "nice route, Mason!" 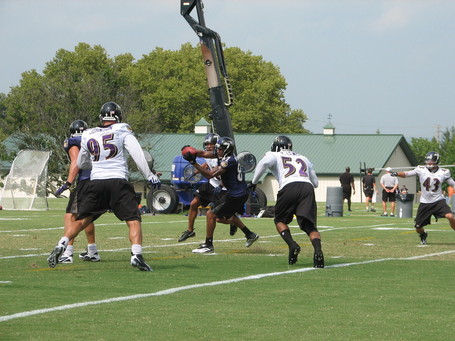 FG time again, as Graham Gano takes all the reps this afternoon. He hits from 51, 55, 54 but misses from 53, 49 (hits right upright) and is just short on a 60 yard attempt. He then hits from extra point range, 40, 44 and 50 yards before badly shanking a 57 yard attempt. Finally he hit a 51 yarder on his last kick of the day. Overall, he is seven for eleven and keeps the competition too close to call between him and Steven Hauschka. 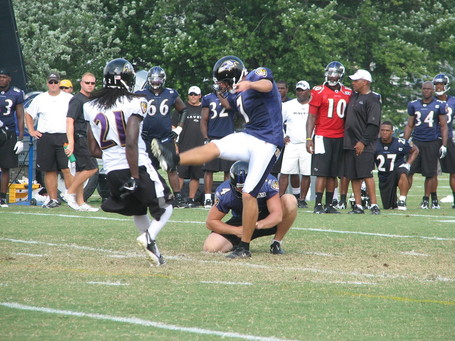 I saw Ray Lewis drinking an orange liquid out of an unmarked bottle. Asking a trainer if it was a secret recipe, he just shrugged and said it was Pedialyte, which is similar to Gatorade but known more for a kids' remedy for dehydration when they're ill. 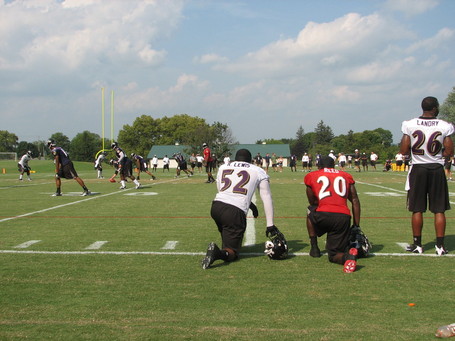 I see the QB's on the far field by themselves, taking turns trying to hit the crossbar from the 30, 40 and then 50 yard lines. Although I missed most of their tries, the only one I saw hit it was Cleo Lemon, who nailed it from 40 yards.

Guard Chris Chester is seen limping very slowly to the locker room. After injuries to Adam Terry (gone for season) and Oniel Cousins, we can hardly lose another key ingredient to an already thin offensive line.

Look at the size of DT Kelly Greggs' calves!

As the practice ends and the team gathers around Coach Harbaugh as they usually do, they bring out all the military personnel in attendance to join in and as one, they chant "family!" together, after which the players all mill about signing autographs and taking pictures with the appreciative servicemen and women.