The Baltimore Ravens were right back out in the oppressive heat this afternoon after a spirited morning session. With temperatures in the '90's, the team kept a close eye on the players' hydration, with water boys everywhere and frequent breaks. 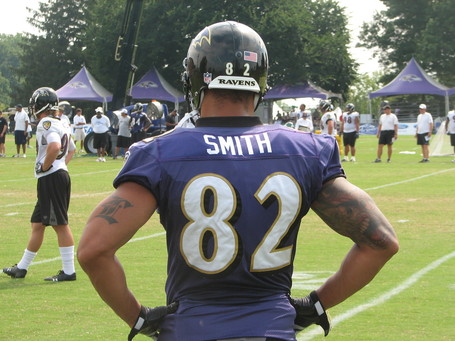 Special Teams were part of the afternoon drills, with even TE L.J. Smith taking part on the return team, along with outside blockers, safeties and roommates Haruki Nakamura and Tom Zbikowski. I notice that on all the kickoffs, placekicker Graham Gano runs hard down the field and then back upfield to do it again and again. He is making the hard effort to impress the coaches any way he can.

The linebackers and defensive backs are practicing in separate areas dropping back into coverage then intercepting passes thrown by the coaches. In 11-on-11 non-contact drills, the offensive line shows a powerful overloaded line with Michael Oher at left tackle and Jared Gaither at right guard and then they reverse positions. Either way, that's a massive force to run behind. 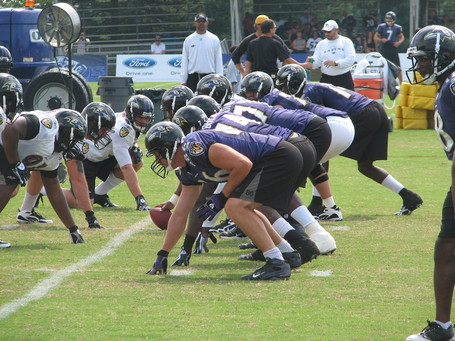 The offense runs drills up the field in five yard increments, practicing their running game against the defense. Once they reach the goal line they go back and do it all again, this time with the short passing game. Lots of reps for everyone, especially in this heat. 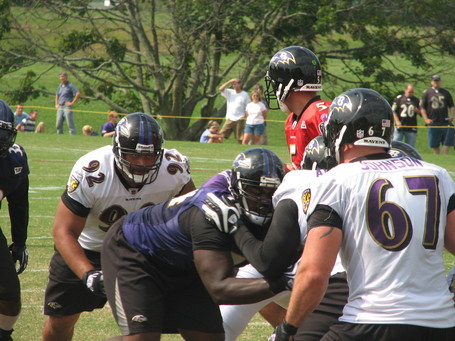 In their goal line offense, they come out in a variety of sets, including one with Haloti Ngata in the backfield. He got a chance to carry the rock and scored, but then raced over to his defensive line coach, Clarence Brooks, and in his excitement accidently pushed him to the ground! In another goal line drill, he led LeRon McClain into the end zone. who needs Lorenzo Neal when you have a 340 pound fullback? When faced with Ngata running at him as a blocker, defensive back, Derrick Martin backed off yelling in jest, "whoa, whoa!" 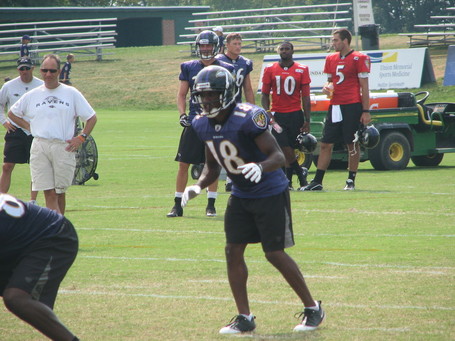 WR Jayson Foster took a few snaps in the Wildcat formation, either handing off or running the ball, with reserve QB Drew Willy split out as a wide receiver.

Practice lasted about 90 minutes and due to the morning session in this heat, that was long enough for the players to be drenched in sweat and they headed right to the locker room as quick as I had ever seen them clear the fields. 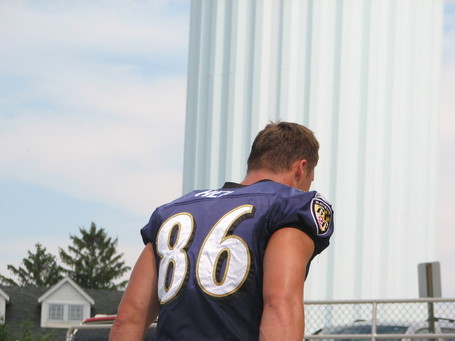