Well it's great to be back in sweltering Westminster, Maryland, watching our Baltimore Ravens prepare for their second pre season contest as well as the 2009 regular season, and hopefully beyond! After a week in sunny Negril, Jamaica, the return to the typical dog days of summer here in Baltimore is a huge difference. The players are sweating and probably losing lots of weight out there, and the training staff is all over the place with fluids and towels for them. 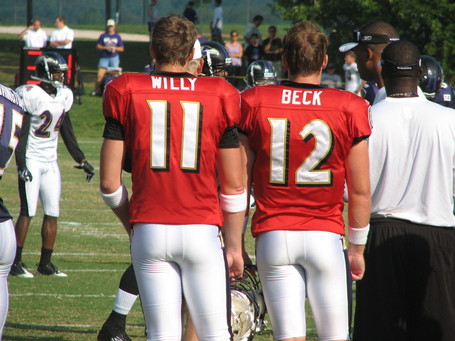 It is another "plus-30" day, meaning the players over the age of 30 have the day off again. Of course, as always, there's Matt Birk in shorts, mentoring the "kids" on his offensive line. There are a few new faces to me in camp. In addition to the signing of QB Cleo Lemon, the team has brought back previously released QB Drew Willy, giving the team five QB's in camp. Injured thrid stringer John Beck is here and is dressed and participating, so I wonder why there are so many of them? The is a new wide receiver, Bradon Godfrey (6'3", 197 lbs.), an undrafted rookie out of Utah, who played there with Ravens second round pick, Paul Kruger, albeit on the other side of the ball. Godfrey has a jersey with a number, but no name on the back yet.

In 11-on-11 drils, Troy Smith goes right for the new guy, Godfrey, but Lardarius Webb breaks up the pass. Safety Tom Zbikowski bangs Justin Harper on a crossing pattern. On the very next play, Harper beats the cornerback but drops a ball that hits him right in the hands for waht should have been an easy catch. Justin's drops on easy passes is getting to be a concern, although he seems to make the difficult catches that impress everyone. He'll need to be more consistent though, in order to move up the depth chart.

Joe Flacco throws a sweet long bomb to Kelley Washington for what appears to be a 75 yard TD reception. The offense then puts a little wrinkle into their formation with RT Michael Oher in motion over next to LT Jared Gaither. However, rather than running the ball, Flacco throws a quick hit to J. Harper with Oher rushing over to lead the blocking. Yes, Oher is as fast as they say he is! 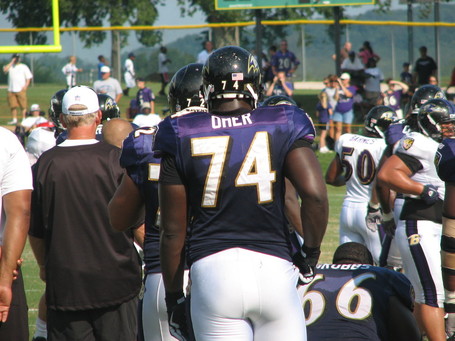 Troy Smith his the new guy, Godfrey over the middle. Troy is taking charge out there, yelling at Godfrey for inadvertantly going in motion causing a procedure penalty, but then patiently explains the play to him afterwards.

Smith's 10 yard pass to Eron Riley is completed but then he is pancaked by safety Dawan Landry. Kelley Washington continues to impress, with a short five yard sideline catch, where he is quickly tackled by Frank Walker and Domonique Foxworth. On two successive plays, Flacco hits Washington in the numbers over the middle but Kelley bobbles and drops it and then comes right back for a completion in the same area on the next play. Washington then makes a great diving sideline grab, tiptoe-ing out of bounds for a first down. He plays to the applauding fans by posing and signaling a first down before giving the fans a smile and a "thumbs-up!"

It's field goal time now. Steven Hauschka lines up for a 35 yarder, but the fake is on and holder/punter Sam Koch hits Edgar Jones for a TD pass. Hauschka then proceeds to hit from 35 and 41 yards, but surprisingly misses from 46, 52 and 58 yards, hitting the crossbar on the last attempt. In his turn, Graham Gano splits the uprights from 35, 41, 46, 52 and 58 yards. The final kick hit the left upright and went through, but would have been good from much longer as it hit halfway up on the upright.

Troy throws compete to Bradon Godfrey on the sideline, prompting Frank Walker to yell at the ref, " you gotta call that," referring to Bradon alledgedly pushing off. WR Eron Riley goes up real high to snag a sideline pass before falling out of bounds. John Beck gets in on the action, hitting rookie TE Davon Drew over the middle behind defenders for a nice gain. Drew has a great opportunity on this team and needs to step up and make himself shine during camp, which he just has not done so far.  Cleo Lemon hits Godfrey for a short gain and it seems like the QB's are noticing that he holds onto the ball real well and are making the effort to get the ball to him. 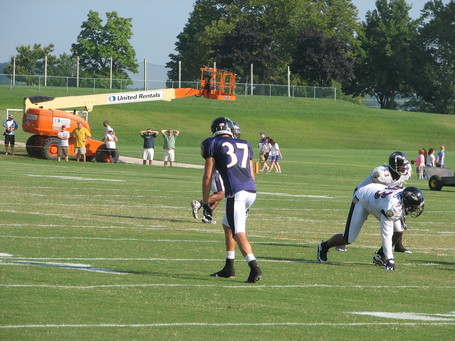 Kelley Washington again makes a reception over the middle, beating Lardarius Webb. Webb gets yelled at by the coaches, "Webb, don't let him do that!"

Smith sets up in the pocket, looks right and then calmly throws complete to his left to Ernie Wheelwright. It's comforting to see a confident backup to Flacco, if indeed he is needed to step up.

Back to 11-on-11 drills, where Haloti Ngata rushes Flacco and knocks down a pass, then getting in Joe's grill before Flacco playfully pushes him away.

Good news! T-Sizzle is on rthe sidlines in shorts and a t-shirt, but no boot on his foot and seems to be walking, at least, without any limp. In his absence as well as the other "plus-30" guys, rookie Paul Kruger is running with the first team and looking good.

Wiilis McGahee makes a nice run as the practice comes to a close. He puts his shoulder into LB Prescott Brugess who tackles him but afterwards is laying on the sidelines favoring his wrapped left thigh. He gets up and seems to be be fine, though.