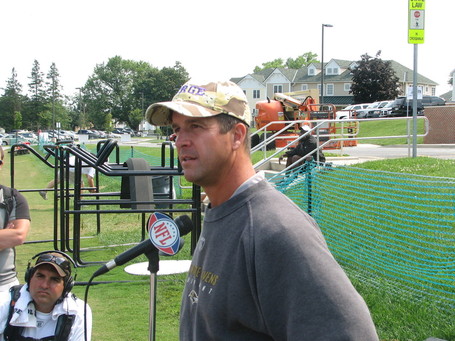 I managed to get an question into Baltimore Ravens Head Coach John Harbaugh as he was finishing up his time at the podium after Saturday morning's practice session. Then after the questions were done, I patiently waited until he finished a long one-on-one interview. As I attempted to get in one final question, he was almost whisked away by Ravens Senior VP of Public & Community Relations, Kevin Byrne. They relented and when I asked my question, both Coach Harbaugh and Kevin agreed it was "a very good question" and Harbaugh took a moment to answer it.

My initial question at the podium was this:

Beatdown: What went on with that scuffle (during Saturday's practice)?

Click on the to see my "very good" question and Coach Harbaugh's answer.

Beatdown: I know the Hall of Fame Induction Ceremony is today and Ralph Wilson is getting inducted as an owner (of the Buffalo Bills). I know you weren't here under the ownership of Art Modell, but how do you feel about him being inducted into the Hall of Fame?

Harbaugh: Well, that's a good question. That's a very good question. We've said many times, I'm a big supporter of Art Modell in the Hall of Fame. To me, it's a no-brainer. The league would not be where it is today, from a television standpoint, a marketing standpoint, the coaches he hired, if not for Art Modell.

BB: Why does Cleveland have such a stranglehold on blocking that?

JH: I don't know. There are so many people who are so viciously opposed to it because of what happened, and even Art Modell did everything he could to keep the team in Cleveland. I mean he did everything humanly possible. It was either move the team or lose the team.

JH: Hey, I don't know the  details of that, but I know the Art Modell story and I know that Art Modell did everything he could to keep the team in Cleveland. Everything humanly possible, yeah.