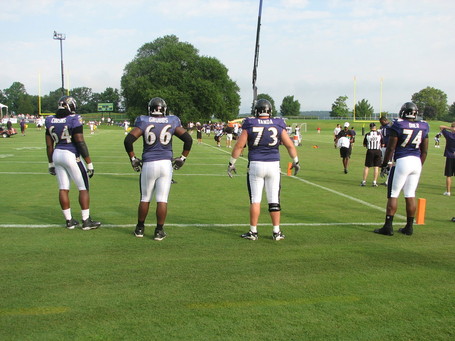 It was a clear and sunny morning, with sunshine and high temperatures expectred after a rain soaked Friday afternoon. It was nice to see Trevor Pryce dressed after seeing him carted off yesterday with a stepped-on foot. OG Marshall Yanda was removed from the PUP List (Physically Unable to Perform) which was good to see this early in camp. Once again, Jared Gaither is still a beast, although his belly is not nearly as big as last year. 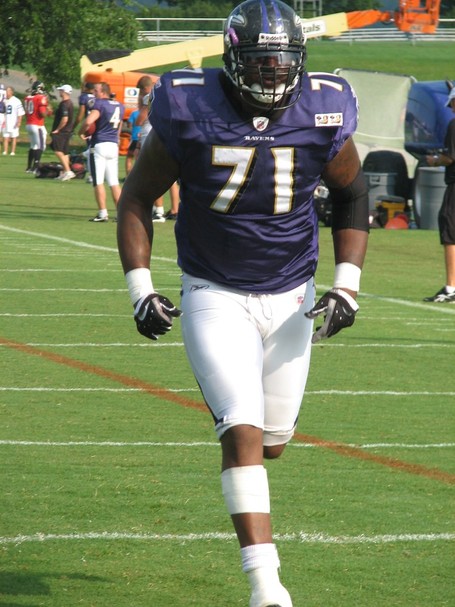 Kickoff return drills are happening, with the "pitching" machine doing the "kickoffs." Taking turns returning them are Ray Rice, Lardarius Webb, Chris Carr, and even Willis McGahee, as former return man and still on the sidelines is Yamon Figurs.

The QB's are now throwing long passes to the WR's, drawing cheers with each completion. Even in football it is safe to still say, "chicks dig the long ball!" 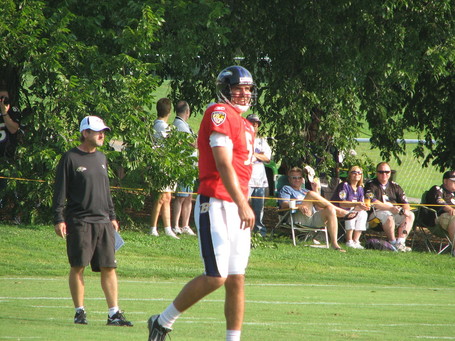 The placekickers seem really bored. They spend a lot of time just standing around, talking, moving from one area to another. Every now and then they place the ball in the "tripod" holder and boot one in drill after drill to strengthen the leg, ensure proper technique and gauge accuracy. Zzzzzz.... 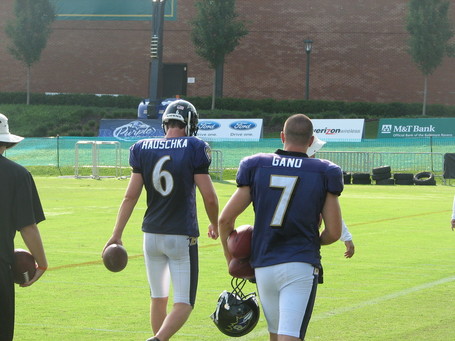 In live tackling 11-on-11 drills, Ray Rice broke a 30 yard run, finally knocked out of bounds coming right at me on the sidelines. See the video I took of this play:  Ray Rice Runs Right At Me! 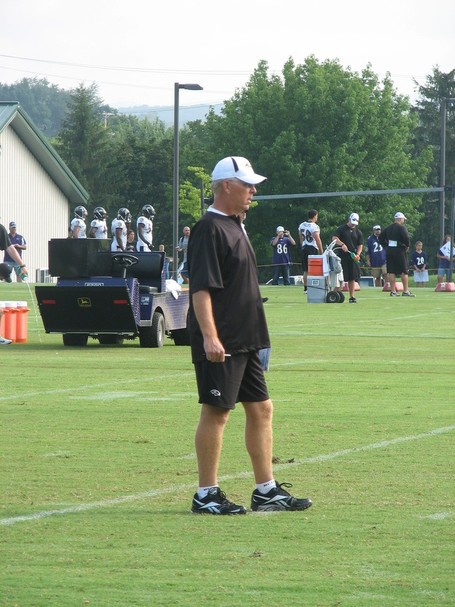 Offensive Coordinator Cam Cameron is barking instructions to the players, as the 1st string offensive line is pushing the 2nd team defense back 3-4 yards every play. Troy Smith directed the 2nd team offense up against the 1st team defense and threw a long 40 yard completion to WR Marcus Smith. But wait, the referee called Marcus for offensive pass interference, which drew complaints from the offensive sidelines prompting Ray to yell at them, "quit crying!" 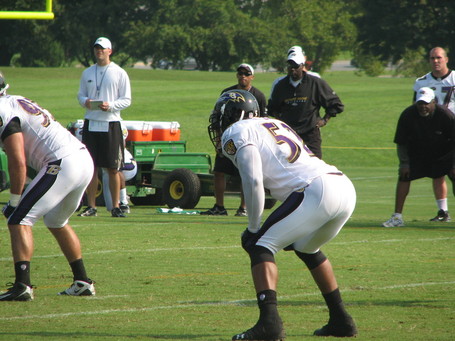 When the 3rd team offense got on the field, I noticed an insignificant run of 4 yards by RB Cedric Perrman but what made it significant was that he carried 3 or 4 defensive players most of the way on his back. 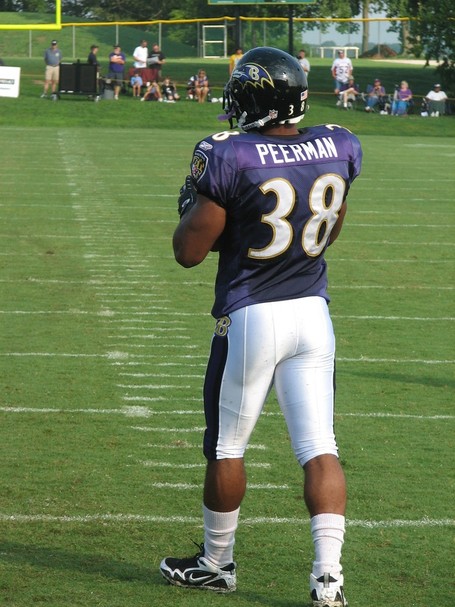 Field goal drills had Steve Hauschka hitting from 32, 40 and 45 yards, with Suggs under the goalposts signalling good each time, although he did miss the 48 yarder. Gano came on to hit his 32 yarder, but missed the 39 yard attempt. He then consecutively hit from 44 and 48 yards. In other full contact drills, Flacco threw to no one in particular and Dawan Landry had his second pick of camp. Troy Smith then contributed to the defense by having his pass picked off by Haruki Nakamura and returned down the sideline until Troy raced over and knocked him hard out of bounds, prompting both Antwan Barnes and Terrell Suggs to get in Smith's face for the unnecessary contact in the first altercation of camp.

Flacco then hit consecutive passes to Todd Heap and Marcus Smith for 20 yards each. In the Red Zone, Flacco had Mark Clayton breaking open across the goal line but a leaping Dawan Landry snagged his second interception of the morning and third of camp. Finally, Flacco hit Smith across the middle for a 20 yard TD reception. 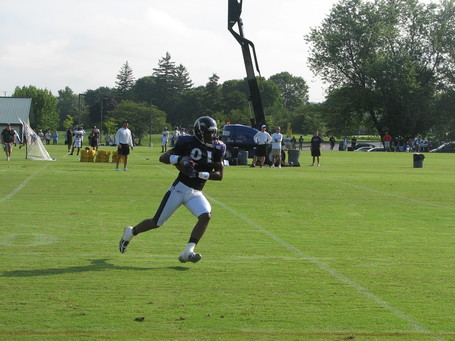 Final drill before the morning ended was kickoff returns and everyone seemed to take part in the coverage side of the ball, including Suggs and Flacco on one side. On the final return, Lardarius Webb broke into the clear amid yells from the coaches to "finish it," but kicker Graham Gano caught him from behind at the goal line.

After practice ended, Justin Harper once again fist-bumped me on his way by, Michael Oher shook my hand, and I also got short interviews with Haruki Nakamra and Dawan Landry before they left the field. Check out their interviews when I put them up as a separate FanPost.