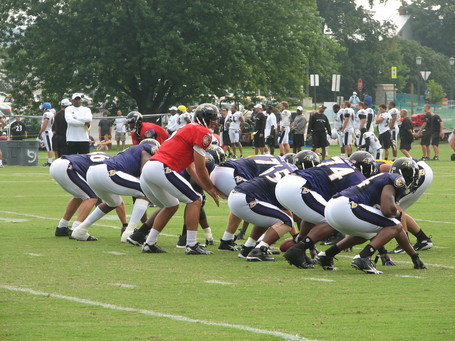 Continuing the previous news, notes and photos from the Baltimore Ravens first full team practice of the 2009 season, I was amazed at the size of the crowd this morning and heard it was one of, if not the largest in Training Camp history.

The offense and defense were on the field for drills for the first time. Lots of contact and trash talking, especially from the defense. Dawan Landry and Haruki Nakamura working together as first team safeties. Meanwhile, while Troy Smith and John Beck take turns running the offense, Joe Flacco was at the other end of the field wowing fans with long passes to the WR's. Center Matt Birk confidently calling out blocking assignments. Willis McGahee just put his shoulder down into 350 pound DT Kelly Talavou and ran him over, which was great to see. 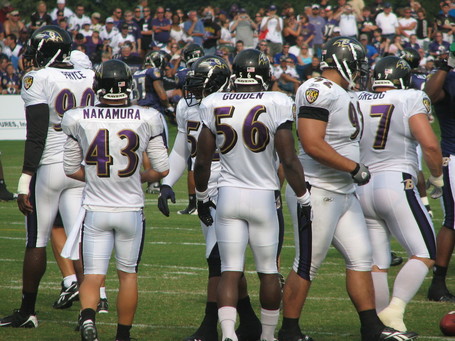 Ray is kneeling on the sidelines, just yelled to head coach John Harbaugh on the field, "Hey Coach, I ain't heard your voice all day," as I stand only five feet behind him! 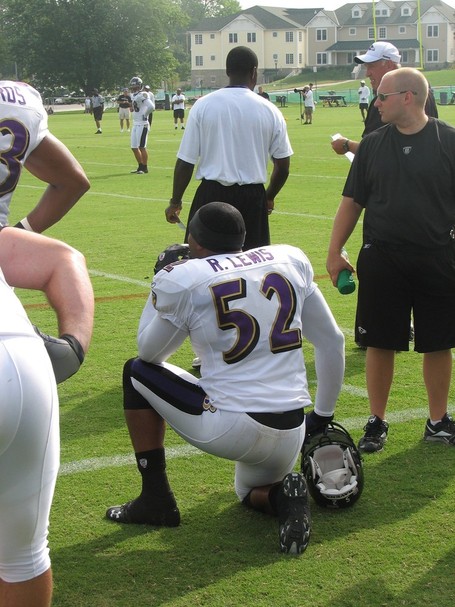 More after the "Jump" 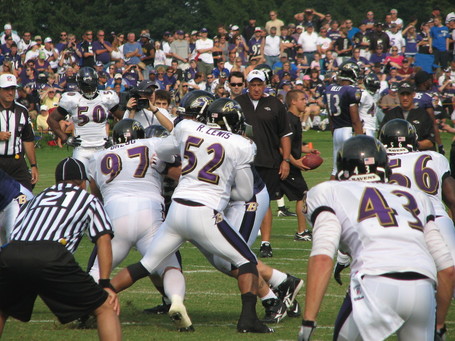 Flacco hits Ray Rice in the flat, who runs down the sidelines in front of the fans, and is met by Ed Reed, who is wearing the red (no contact) jersey. Clayton beats Fabian Washington to a pass for a great grab and then breaks away for a nice gain. Rookie DE Will Johnson was getting his hamstring wrapped in ice and DE Trevor Pryce was seen with his shoe off flexing his toe while grimacing. Later he was carted off the field but was seen walking fine in the lobby of the hotel later with a small bandage wrapped around his foot, which reportedly got stepped on.

The crowd is INSANE! There are so many people here, with the crowd estimated by the team at 11,000 fans, who are packed along the sides 20 people deep in places. They are cheering and yelling for acknowledgement. "welcome to Baltimore, Foxworth" got a fist pump from Domonique. "Hey Ray" and "Hey Suggs" got smiles and waves from the players.

The placekickers came out kicking. Both Steve Hauschka and Graham Gano were good from the 38 yard line. While Gano hit from 40, Hauschka missed his but came back to nail it on the second attempt, plus one from 45 yards. Gano hit consecutive FG's from extra point distrance along with 25, 35 and 45 yards. 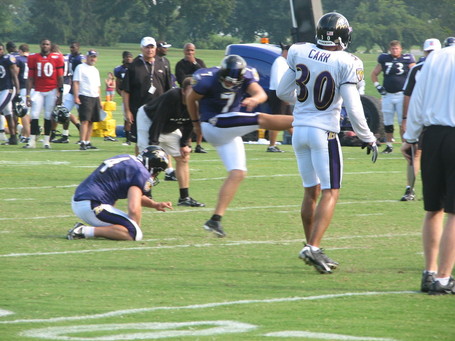 Flacco hits 6'5" WR Ernie Wheelwright over the middle. Then he threw one up to Todd Heap over the middle, who tipped it and grabbed it as he was being tackled, reminding me of the key grab he made in the Tennessee playoff game last season. 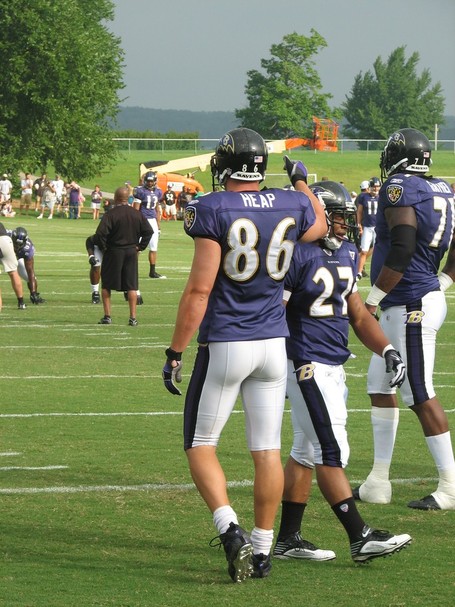 Ray Lewis headed to the locker room and returned a few minutes later. He received huge cheers as he ran along the sidelines from the fans in the stands. Funny thing is, he was probably returning from just going to the bathroom!

The sun is HOT! What happened to the clouds and rain prediction?