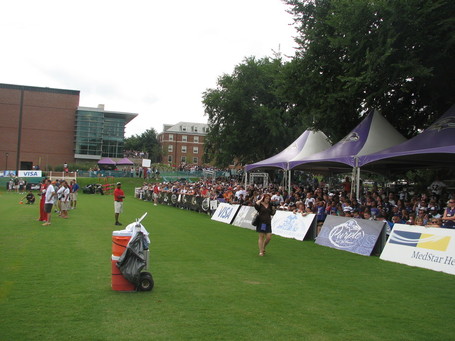 The Baltimore Ravens opened their 2009 Training Camp on Tuesday, but today marks the first time the full team, including all veterans, practices together at McDaniel College in Westminster, Maryland. The veterans reported to camp yesterday, although they began to trickle in and I saw a few at Wednesday afternoon's session. Of course, Baltimore Beatdown will be there this morning and during the break between the two-a-days, I will post my news, notes and photos. Gotta go get ready and head out to Camp. Check back around lunchtime for more here.

On the field at 8:45am, and already the crowd is huge (later estimates put the number at 11,000 fans according to the team, among the largest ever for a Training Camp Practice). There is a different atmosphere here compared with the past few days, with so many more players and the crowd swelling all around the edges of the field.

First looks have me seeing Willis McGahee in full gear, Haloti Ngata stretching, Suggs yakking out loud, and first round draft pick and newly rich man, Michael Oher looking fit. Ray Lewis just walked down the steps right by me to the field for the first time today! The weather is surprisingly good, considering the expectations of clouds and rain today.

Lots of "oohhhs" and "aahhhs" from the crowd as the Qb's hit on long completions to the wide receivers early on. As expected, RB Ray Rice is running with the first team along with WR's Mark Clayton, Demetrius Williams and of course, RT Michael Oher. I've said it before and I'll keep on saying it, "Jared Gaither is a BEAST!"