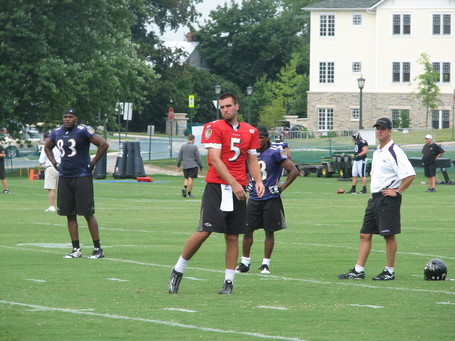 The afternoon session in Westminster was a bit more subdued than the morning one. As the day moved towards the end, some of the veterans began to trickle in to say hello to the coaches and other players. We saw LB Jarret Johnson, safeties Ed Reed and Haruki Nakamura, WR Marcus Smith and DT Justin Bannan on the field in shorts. Veteran CB Samari Rolle made an appearance in uniform, but just seemed to be stretching and not participating.

I overheard one of the defensive line coaches laughing, saying he heard that DT Haloti Ngata has brought his own bed with him to the team hotel!

Believe it or not, OL teammates Robby Felix and Bryan Mattison were STILL going at it, one-on-one!

The offense was practicing a wide variety of sets, including multiple wideout and triple option plays with different players at every position.

In 7-on-7 drills, the offense had a good series of plays. QB John Beck hit newcomer WR Jayson Foster, Troy Smith hit Justin Harper and Joe Flacco completed a good one to Demetrius Williams, who outjumped a shorter Lardarius Webb. Beck then hit Mark Clayton with Fabian Washington hanging all over him. Another fingertip grab by Clayton, once again over Washington, would have been a catch-and-run 50 yard TD in a game situation.

In field goal drills, rookie Graham Gano drilled a bunch with different holders, including successfully with Joe Flacco holding. Fortunately, CB Chris Carr will not be a holder, as when he did put one down for Gano, Graham drilled his offensive linemen in the back, causing them to yell, "Carr, get out of here!"

As I said earlier in this piece, DT Justin Bannan was there in shorts and a sleeveless top, showing off his incredibly huge "guns" which are apparently notorious amongst the players.

CB Derrick Martin, due partly to the absence of enough safeties (although it is runored that due to CB depth, he is moving to the safety position), played with confidence and was very talkative, directing the rookies playing alongside him on defense.

Photos after the "Jump." 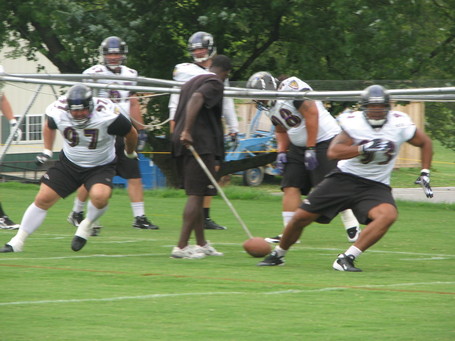 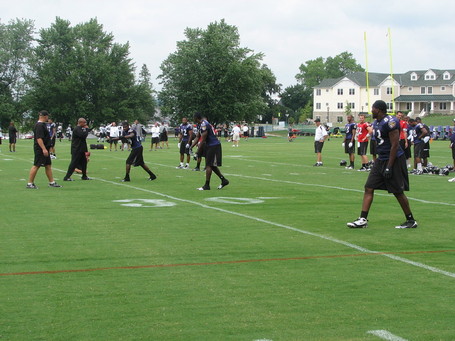 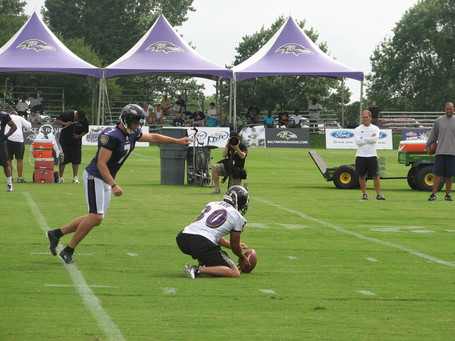 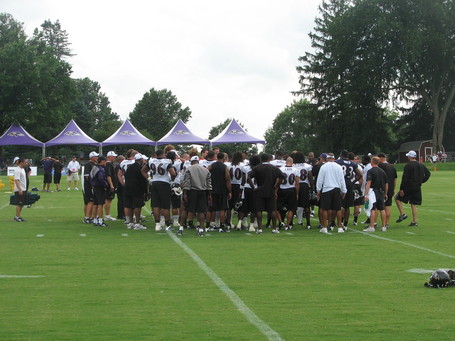