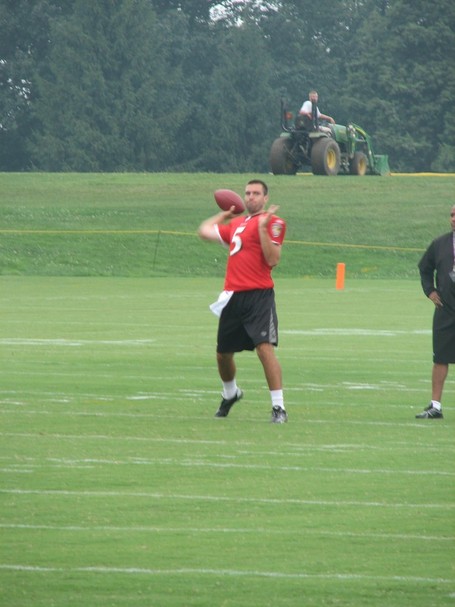 The Ravens started off their second day of Training Camp this morning with a couple of additions and some deletions. With overcast skies and an occasional drizzle, I set up in the end zone, watching the QB's throwing deep passes to the corners of the end zone, each one pretty much putting it dead on every time, although Flacco's longer arm looks stronger than than the other two. In Special Teams' "Gunner" drills. Rookie CB Lardarius Webb went up against both Fabian Washington and Chris Carr - now that's some of our best speed on the field! Webb split the two of them and went up the middle rather than trying to beat them outside.

More notes and photos after the "Jump."

Center Robby Felix and OL Bryan Mattison were still going at it, squaring off in one-on-one drills as they were last seen doing yesterday afternoon. Perhaps they were out here all night long?

Rookie TE Davon Drew participated in non-contact offensive drills, while L.J. Smith reportedly tweaked a hamstring yesterday and was just a observer this morning. I saw him limping off the field yesterday afternoon and thought something was up, although Harbaugh said it was not anything to worry about. Flacco's "1st team" receiving corp included Drew, D-Will, Clayton, FB Jason Cook and both RB's, Cedric Peerman and Matt Lawrence. Peerman fumbled a handoff from John Beck, prompting yells from the coaches. The QB's took turns practicing the "kneel-down" play. Here's hoping we have reason to run it often at the end of the game!

The practice seemed to be run at a much slower pace today than yesterday, which was boring from a fan's perspective with gaps of time between drills and reps.

Later in the practice session the tempo was upped and Flacco's long pass completion to Justin Harper earned applause and cheers from the fans in attendance. In 11-on-11 drills, Harper was knocked to the ground by CB Frank Walker, perhaps the first real hit of the camp. LB Prescott Burgess also put FB Jason Cook on the turf after he caught a short pass over the middle.

J. Harper faked Frank Walker off his feet for a completion on the sideline from Smith. Flacco rolled right then threw long left to D. Will, but the pass and Williams were knocked down by a leaping Lardarius Webb. Troy Smith hit Justin Harper on a bullet pass on a crossing pattern that Harper took to the house, outrunning Dawan Landry. Harper also made the best play of the morning when he grabbbed a pass out of Webb's hands at the last second and outran DB K.J. Gerard to the end zone amid the loudest cheers and applause from those in attendance, prompting Smith to run upfield to congratulate him on the play. When I spoke to Harper after practice, talking about that play, he said, "all we can do as receivers is go out and make plays," referring to negative comments being made about the so-called weakness of our receiving corps.

John Beck overthrew D. Will and just does not look anywhere as sharp as even Troy, much less Joe.

Fourth round draft pick, LB Jason Phillips was doing conditioning drills while Willis McGahee was seen running lengths of the other field over and over.

Tavares Gooden was overheard during an interview saying, "...Friday will be fun to put the pads on and get it done."

Podium interviews with Coach Harbaugh, Paul Kruger and Lardarius Webb were held and their comments will be posted shortly. 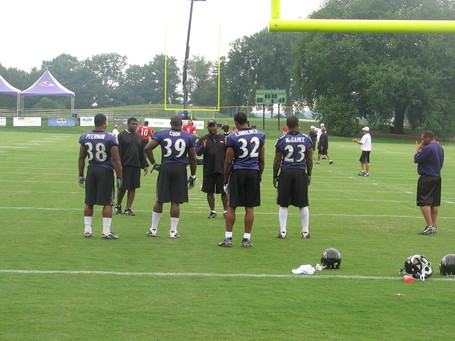 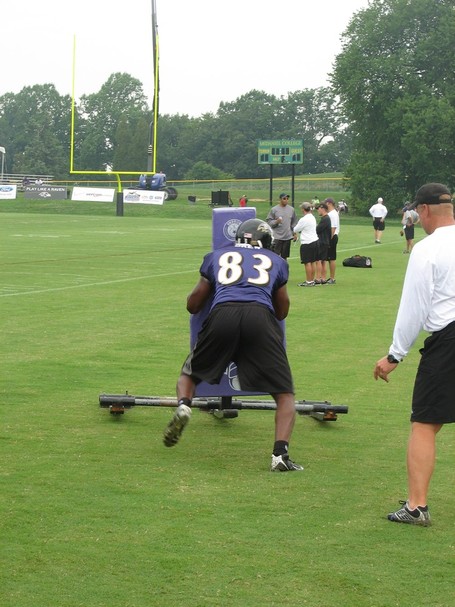 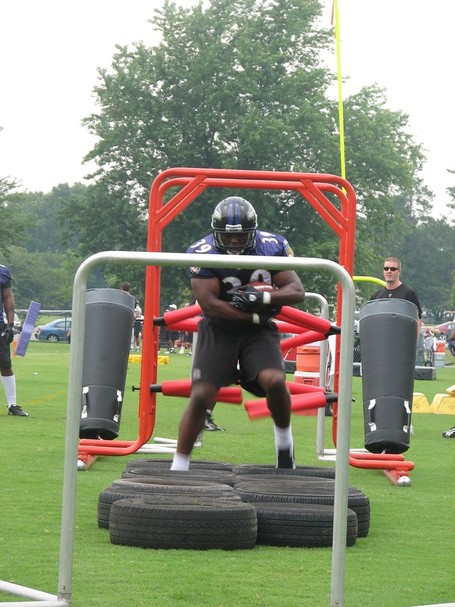