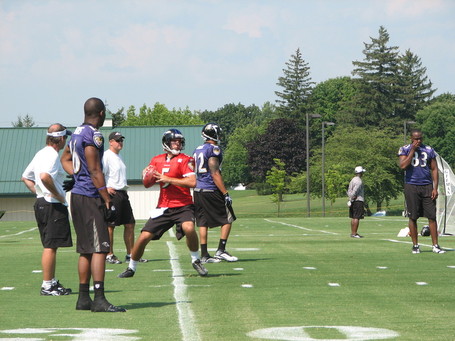 After a spirited practice at Training Camp in the morning, the team was back out there at 3:30pm Tuesday afternnoon. Here are some notes on my observations:

The QB's took turns throwing nice passes to WR's Mark Clayton, Demetrius Williams, Justin Harper, Eron Riley, Isaiah Williams and TE L.J. Smith. Flacco's passes to Clayton look sharp as he catches everything with the glue-like hands that a #1 wide receiver should have. D. Williams looks confident and J. Harper also looks good. L.J. Smith looks every bit the receiver we were looking for when we signed him. He looks like a wide receiver in a tight end's body.

Flacco was zipping passes all over the field. There is no question who the starter is in his mind this year, as well as everyone else's mind, including both other QB's Troy Smith and John Beck.

There is a new receiver in camp, already wearing what was supposed to be Drew Bennett's number 18, although his name is not even stitched onto his jersey yet. He is little known Jayson Foster, whom we will know slightly more about at Wednesday's practice other than that he is only around 5'7" tall, but very quick after the catch.

Troy Smith threw a nice deep ball to WR Eron Riley. D-Will is running like he has something to prove to both himself and everyone else - which he does - stay healthy all season!

Offensive linemen Robby Felix and Bryan Mattison were seen bustin' butt in one-on-one drills over and over again. Felix was the undrafted free agent center who suffered a stroke but was looking to be one of the top centers coming out of college, while Mattison is the son of Defensive Coordinater, Greg Mattison.

CB Derrick Martin read QB John Beck's eyes, rushed in to pick one off his shoetops and took it to the house. Seldom used RB Matt Lawrence is contantly hustling, but seems like a longshot although he plays with versatility, running and catching well. Flacco hits J. Harper in traffic with a bullet. A small but significant play had Flacco looking the entire defense to his right then threw left to RB Cedric Peerman underneath for a nice gain.

Flacco to Harper is a common occurrence. Clayton has a nice fingertip grab on a curl-in completion from Flacco. D. Williams snatched a rope from Troy Smith right in front of L. Webb.

Click on the "Jump" for some photos from the afternoon session.

Flacco up at the line of scrimmage: 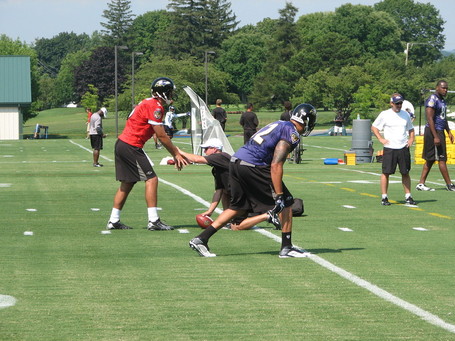 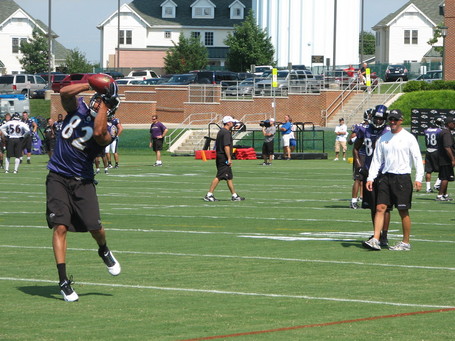 WR Justin Harper about to catch a long one: 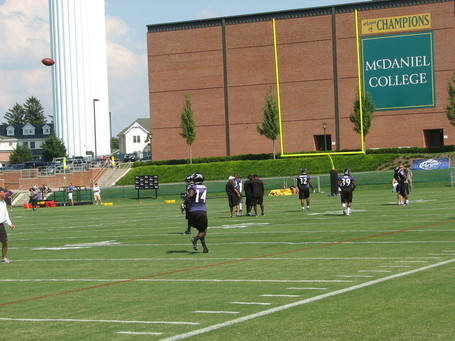 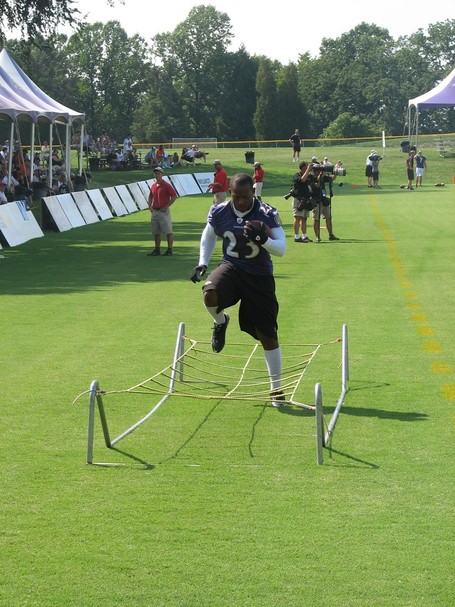