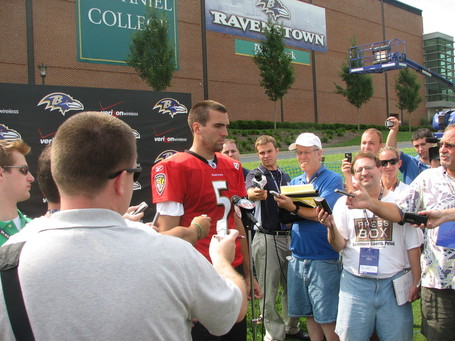 DT Kelly Gregg looks like a fire hydrant and if healthy, will be a welcome addition to last year's ferocious defense.

Rookie CB K.J. Gerard looks taller than the 6'1" that he is listed at. So do WR's Justin Harper and Eron Riley, both listed at 6'3".

QB Joe Flacco (6'6") stands head and shoulders above both Troy Smith (6') and John Beck (6'2") and walks with a swagger not normally seen in a second year player. L.J. Smith seen working hard on the blocking sled and looks bigger than I expected, plus he is catching every high pass on his fingertips every time.

Demetrius Williams is running and catching without any apparent hitch in his step. In a post practice interview, Williams said he's 100% and when I asked him if he was ready for some hitting, he replied, "I feel I am ready for all of that and I think I'm in the best physical shape in a long time. I'm not worried about anything as far as physical right now."

Willis McGahee, as noted earlier is in camp but is not participating in drills. In post-practice interviews, McGahee said, "...nobody wants to sit on the sideline. I just want to make sure I'm completely healthy." When asked about his offseason training regimen, he jokingly refused to give up his secrets, only stating, "I feel more leaner."According to head coach John Harbaugh, a number of players were place on the 'Physically Unable to Perform" (PUP) List, which included McGahee, along with Davon Drew, Ben Grubbs, Yamon Figurs, Marshall Yanda, Adam Terry and Samari Rolle. Although none of these injuries other than Yanda's continuing recovery, Coach Harbaugh says they just want to be careful at the start of camp.

Click on the "Jump" to read more notes from the morning practice session.

Rookie placekicker Graham Gano was at practice, kicking for the first time today since we saw him last at the end of the off season OTA's in June. He actually missed a short 30 yarder in drills, but had a rotating group of holders that included Joe Flacco, Troy Smith, Mark Clayton and even a couple of coaches. His regular holder, punter Sam Koch, was not in camp. His response when I took him aside after practice was that there were a couple of "interesting" snaps, but as a kicker "it's my job to put the ball through whether the ball's flat on the ground or perfect holds."

Once practice was over for the morning session, both Joe Flacco and Coach Harbaugh took the podium. In the bombardment of questions to Flacco, I was able to ask him how the game has "slowed" down for him now compared to last year. Flacco replied, "... by the end of the year, the game was at a good speed for me. I've always said that as I grow with the offense, the defense will get slower." He also said that he tihnks the team will go a long way. "We came close last year and plan on going further this year," stated Flacco. When questioned about his recent Reebok commercial for the NFL.com's Fantasy Files, including how long it took to make and were there any special effects, he replied, "It took about an hour to make it, and do you think I need special effects to do that?"

Coach Harbaugh took the podium next and started off saying that he thought practice was "crisp" but it would be sharper on Friday. He said he thought Demetrius Williams looked good and "his goal is to become a more durable football player." Asked about the constant debate of the team needing a #1 wide receiver, Harbaugh shot back that "whoever is out there catching the ball will be real happy Joe's throwing to them." He went on to acknowledge that they have discussed Michael Vick and Matt Jones among others including Amani Toomer and Justin McCareins to decide "what they can or cannot do for us." However, he said that someone in camp will step up, be it a "Marcus Smith, Justin Harper or someone else."

I was able to ask a question to WR Mark Clayton about knowing he has the confideence t step up, but what about the younger guys at wide receiver? Clayton replied, "We got some guys really hungry, ready to make plays to do what they can to help this team."

More notes and photos will be posted later today after the second pracdtice session this afternoon.