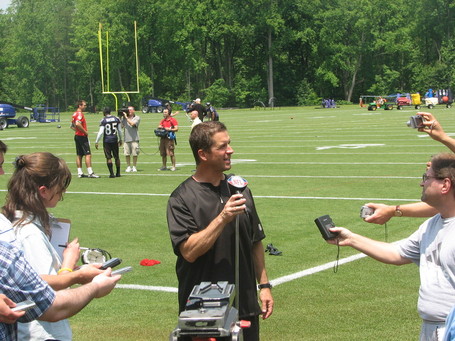 Baltimore Ravens second year head coach John Harbaugh is going to experience the "real" war in July, as he joins a group of NFL head coaches who have been invited to tour the Persian Gulf to meet and greet the men and women of this country who are putting their lives on the line each and every day. While we may consider the battles waged between the white lines of the gridiron each Sunday in the fall a "war" it is no comparison to what is happening on a daily basis halfway around the world from us. Men and women, including kids who are old enough to vote but not even able to legally drink, spend the better part of each day wondering if they will make it through the day unscathed by enemy fire, roadside bombs, all while fighting an unseen enemy in desert conditions.

The Ravens coach is joining New York Giants head coach Tom Coughlin, Tennessee Titans head coach Jeff Fisher, and former head coaches Bill Cowher (Pittsburgh Steelers) and John Gruden (Tampa Bay Buccaneers), who will meet and speak with the servicemen and women in the Gulf, including both Iraq and Afghanistan. This is quite an honor for the Ravens second year leader, as the others have earned their reputations in the league through years of success and experience.

To read the entire story, go to BaltimoreRavens.com.

Now is not the time to make your comments about what Harbaugh should do to Cowher and Fisher once they lean out of the chopper to get a better look as they fly over enemy territories, but I can't stop you....