Share All sharing options for: Baltimore Beatdown Kicks It With Ravens' Graham Gano 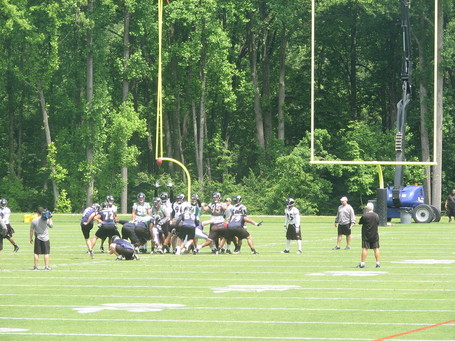 While at the Baltimore Ravens Training Facility a couple of weeks ago, I was able to get a quick interview with the Ravens' undrafted free agent out of Florida State University, Graham Gano. If you've been a frequent visitor to The Beatdown, you know I've been all over the kicking competition for the departed Matt Stover's position. Stover, one of the most prolific kickers in NFL history, was told by the Ravens that they had no intention fo re-signing him and haveopened up the kicking competition for his replacement. The two involved in what might be the team's closest competition, are second year kicker, Steven Hauschka and Gano, who won college football's Lou Groza Award, given to the nation's best placekicker. Gano hit on 24 of 26 attempts last year, including 5 of 7 beyond 50 yards, with a long of 57 yards. He didn't miss inside the 49 yard line and was also named the ACC's best punter by the Sporting News. That dual capability is sure to be to his advantage as this position will probably not be decided until after the final pre season game. So far, while both have looked very good in the off season practices, Gano has hit a couple that would have easily been good from 60 yards.

In the locker room after practice, I was able to catch up with Graham. I also touched base with him earlier this spring after he was signed as an undrafted free agent immediately after the NFL Draft in late April. I was hoping the Ravens would use one of the final draft picks to select Gano, but was still estatic when I heard they had signed him afterwards. This is a great opportunity for him to replace a Baltimore kicking legend and it looks like he is making the most of his chances. Clcik here to see his earlier interview.

Click on the "Jump" to see the transcription from my interview with Graham after camp recently:

BB: I sent you some questins and you sent them right back to me.

GG: Oh yeah, thanks for doing that.

BB; I thought you looked really good out there. I saw you guys spent a lot of time doing "pooch" punts. Do you do that every practice for that amount of time?

GG: Today we worked on that quite a bit.

GG: It’s feeling sore as we did a lot of kicks today and I’ll be icing it down but it’s feeling fresh and good.

BB: Getting used to weather?

GG: Yeah it fine up here, not as humid as I’m used to weather. I like colder weather so I think it will work out well.

BB: Are you originally from down there, right?

BB: Sampled any of our local seafood? Had any steamed crabs yet?

GG: I had some (Manny’s) Crab Cakes, but haven’t had any of those steamed crabs yet.

(Post-Interview Note: After watching the Ravens on NFL Network, where they did a tour of their Practice Facility and specifically the dining area, I noted that the chef's name is 'Manny!')

BB: Take care and good luck to you.