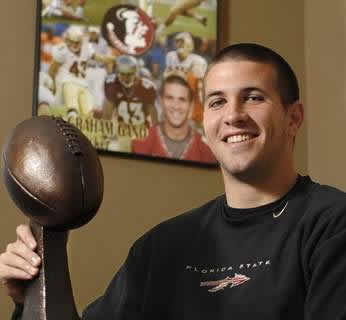 Following in the footsteps of a legend isn't easy for anyone, much less an undrafted rookie. Florida State University placekicker, Graham Gano, was signed by the Baltimore Ravens as an undrafted free agent shortly after the final pick in the 2009 NFL Draft was announced. Gano, who was considered the best kicking prospect in the draft class, was signed by Baltimore to compete with reserve placekicker Steve Hauschka, after long time veteran Matt Stover was told he would not be re-signed by the team. Stover, one of the most accurate kickers in NFL history, was an original Raven brought to Baltimore when the team moved from Cleveland to start anew for the 1996 season. While Stover had been able to make most of his kicks as recently as last season, his leg strength had obviously diminished to the extent that kicks over 40 yards were becoming nail biters. The team kept two kickers active most Sundays, which handicaps the rest of the roster when you need one to try the longer field goals and kickoffs, which Stover had problems with.

Graham Gano converted 24 of 26 field goal attempts in 2008 for the Seminoles, including five of seven from 50+ yards. Gano did not miss from inside 49 yards in 2008. He missed the first two games of the season with a torn meniscus suffered in pre-season but it obviously didn't affect the rest of his season and surely won't his pro career as well. Baltimore Beatdown was able to catch up with Graham before this weekend's initial Rookie Camp. Here is my interview with him:

Rexx:  You were signed to compete with current Ravens kicker, Steve Hauschka, to replace the veteran Matt Stover. How will it feel to try to replace one of the most accurate kickers in NFL history?

Graham:  Matt Stover has made a great name for himself in the NFL and he was somebody that I have looked up to since I began to kick footballs as a ninth grader in high school. He has one of the best field goal percentages of all time and his consistency has set the bar high for kickers all over the nation. To come in and have the opportunity to fill his void will definitely be a challenge, but an honor as well.

Rexx:  What do you expect to be the biggest challenges and differences between the college and pro games?

Graham:  I think that the biggest challenge will be having a longer season in the NFL. I feel that kicking field goals, kicking off, and punting this past season helped prepare me. I feel so honored and blessed to be given this opportunity. My work
ethic is something I take pride in, and I plan on making that a mainstay in my career. My conditioning and preparation is something I continue to do and will work very hard at to make sure I am the absolute best I can be.

Rexx:  You won the Lou Groza Award, given to college football's top placekicker and was considered to be the best kicking prospect entering the 2009 NFL Draft. What pressure does that bring with it?

Graham:  I am very grateful for that award and with it I feel comes a responsibility to live up to that honor by preparing myself to be at my best. I also realize that you are only as good as your NEXT field goal, or extra point or kick off. I am humbled by the task in front of me and honestly, it's important to me to keep my focus on the kicks in front of me rather than the ones in the rear view mirror.

Rexx:  What goes through your mind when you line up for a key field goal and how
does it feel to see a game winning kick go through the uprights?

Ghaham:  I visualize the ball going through the uprights before I even step on the field. When I am out there everything around me is a blur and I am only focused on the snap, hold, and kick. I train in practice as if it were a game so that when the opportunity arises, I have been there before.

Rexx:  Ravens fans might not know that you also handled the punting chores for
FSU and were actually named the best punter in the ACC by the Sporting News.
Although the Ravens have one of the league's top punters in Sam Koch, do you
feel that you could handle both the placekicking and punting in the NFL?

Graham:  In Baltimore my focus will be on kicking field goals and kicking off. If there was any reason that I would need to step in to punt, I feel confident that I would be able to help out. All in all I will do whatever is best for the team whether it is kicking or punting.

Rexx:  Have you seen the Ravens legendary Training Facilities, also known around here as the "Castle?"

Graham:  I haven't been able to visit the facilities yet but I am very excited to get up there and see them all. The Ravens organization is reputed to have top notch facilities and I feel very fortunate to be in a position to compete for a job and be able to utilize them. The "Castle" has a very cool name to it. I am excited to
check it out.

Rexx:  Do you have a nickname that you can share with us?

Graham:  I have a ton of nicknames but the one that sticks out to me the most would have to be Graham Cracker.

Rexx:  What little known fact should we know about you?

Graham:  I was born in Dundee, Scotland. My Dad was in the U.S. Navy for 30 years and was stationed in Scotland where he met my mum.

Rexx:  What talent, unrelated to football, do you possess?

Graham:  I play Call of Duty 4 on XBox360 a lot and I'm pretty good at it! As of late, I have been grilling non stop and really enjoy it.  My girlfriend (Brittany) is excited about this since she doesn't have to cook as much as usual.

Rexx:  Tell us a little about your family - brothers, sisters, any pets?

Graham:  I have four brothers and one sister. (Daniel, Josh, Stewart, Allan, and Elaine) They are all older than me and are spread across the world. Daniel lives in Arkansas, Josh in Oklahoma, Stewart in Pensacola, Allan in Kentucky, and Elaine in Scotland. My mum and dad both live in Pensacola, Florida where I spent most of my life. Brittany and I have a Maltese-poodle mix dog named Chipper. He is about to be three years old, and just because he's a Malti-poo doesn't mean that he's not a manly dog. He has more chest hair than most men I know! HaHa. I am very fortunate to have a loving and supportive family. Without them I would not be the man that I am today. 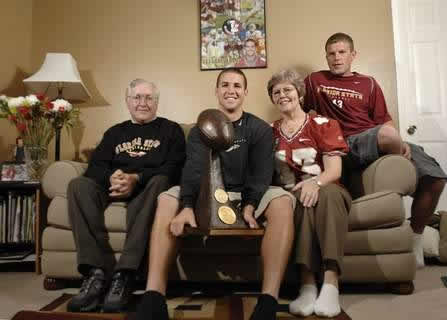 Rexx: Thank you and Go Ravens!!!

Credit for the photos of Graham with his Lou Groza Award and his family appear courtesy of www.GrahamGano.com.

Check out their site for more photos and information about him.