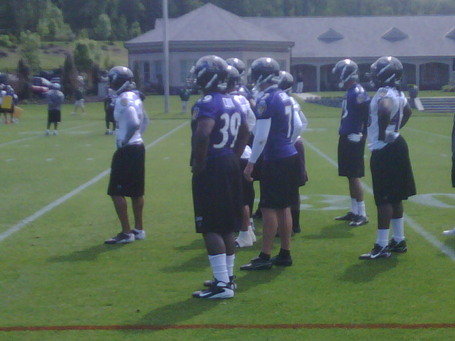 Above is a photo taken at the Baltimore Ravens passing camp that began yesterday at their Owings Mills Training Facility, which you can see in the background. Looking closely at the players, I see recently signed QB John Beck (#7), but not too sure who most of the others are, although I believe that #39 is undrafted free agent FB, Jason Cook.

The Ravens passing camp this week is without a bunch of veteran starters, so some of the reserves got their chances to step up and get noticed. Ray Rice is healthy again and with the injuries to Willis McGahee and LeRon McClain adjusting to a "new" position at fulback, Rice took all the reps with both the first and second teams yesterday and looked real good.

With wide receivers Derrick Mason, Mark Clayton and Demetrius Williams taking it easy, second year pro Marcus Smith ran with the first team and Kelley Washington, who signed his official contract yesterday, caught a 40 yard bomb from Troy Smith for a TD while running with the second team.

In related news, wide receiver Marcus Maxwell was released by the team. Now I guess we won't be getting confused about which "Marcus" we're talking about.

Defensively, with Ed Reed taking a breather, Haruki Nakamura took first team reps at safety and Jameel McClain filled in for Ray Lewis next to Tavares Gooden at linebacker.

Second year QB Joe Flacco loked crisp and accurate, even on the tough over the middle medium range passes that were his hardest to complete last season. Most of all, he reported feeling a sense of a better comfort level that he obviously never had before in spring or even summer camps. He's loose, talking with his receivers after the plays to make sure they are on the same page as him, and is obviously in charge of the huddle now.

All in all, looking good at this point and it will only get better as the injuries heal and the veterans become more involved in the practices.