A Day At The Races

Share All sharing options for: A Day At The Races 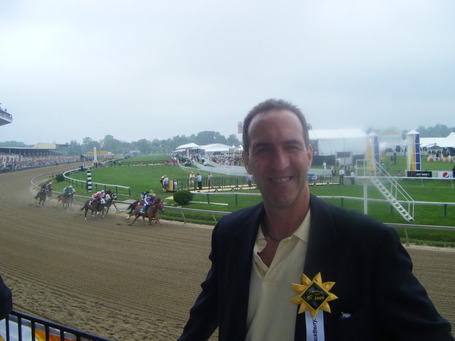 Baltimore Beatdown took the high road for a change, and spent the day Saturday at Maryland's Pimlico Racecourse, home of the second leg of the Triple Crown, the Preakness Stakes. While this may be slightly off the football track, there is a football and even a Ravens connection to the story.

As a guest of my best friend since 7th grade (that's over 38 years ago if your doing the math!), Larry, his company Reasearch in Motion (RIM), which produces everyone's Blackberry phones, was the main sponsor of the Preakness. Therefore, they had a major suite alongside of the first turn at Pimlico, including food (crab cakes, salmon, etc.) and best of all, open bar all day long. They also had a private bet taker for the suite, as well as closed circuit television, air conditioning, and all-access passes for the Infield Village (no, not the "infield"). The rough side of the day, as you can see, was being force to dress up for the occasion, in slacks and sportcoats as required. Quite a huge change from the many times spent boozing it up in the infield and never actually seeing a race!

It was a rough day, betting wise. People around me would have been smart to find out who I was betting on and then just take the other horses. Cashing one winner all day, in an exacta that I ended up splitting with Larry, I was absolutely horrible in my handicapping. And no, I did not take the filly, Rachel Alexandra, who ended up slaying all the boys in the Preakness race!

So the connection to football and specifically the Ravens? The sponsor's box included a group from Under Amour, led by Chairman and CEO Kevin Plank. Kevin was the only one (other than his young son) in the suite wearing a nice sports jacket along with his Under Armour sneakers! One of the guests was none other than former Ravens QB coach and current UCLA Bruins head coach, Rick Neuheisel. Neuheisel was wearing his Bruins blue and gold, looking tanned and relaxed, away from the rigors of the PAC-10 and trying to always catch the USC Trojans.

In addition, for you Maryland Terrapin fans, another guest of Under Armour was the Terp's Mens basketball coach, Gary Wiliams, looking dapper in a suit and this time without all the sweat stained underarms you see when he's yelling and coaching on the sidelines of the basketball court!

There was also some other former athletes and one guy that I was introduced to was named Vince Washington, a former wide receiver for the Michigan Wolverines back in 1985-88. He actually started in front of future Heisman Trophy winner, Desmond Howard and caught passes from former Ravens QB, Jim Harbaugh, now coach of the Standford Cardinal and brother of current Ravens coach, John.

So there you have it. An incredible day at the races despite the lack of wagering success, plus a football and Ravens connection or two. Thanks to Blackberry and my good friend, Larry, it was a great day as you can see from the incredible view of the race in the photos below. 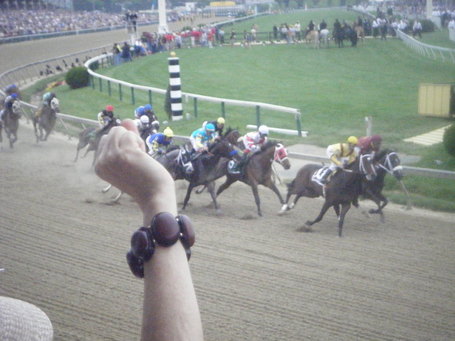 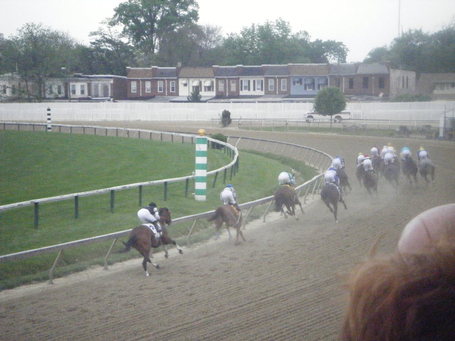 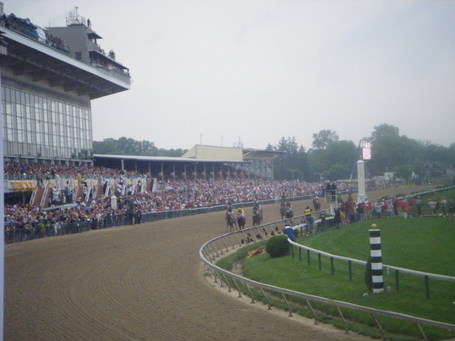 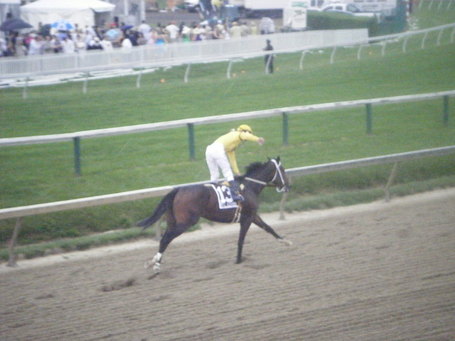