Share All sharing options for: Kelley Washington: The Next Great Ravens Wide Receiver? 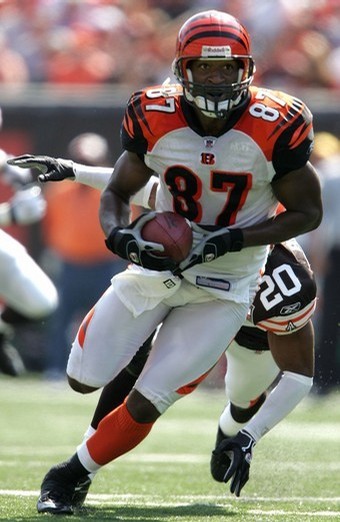 While it is not official just yet, the Baltimore Ravens were impressed enough with free agent wide receiver Kelley Washington to contact his agent to begin contract discussions. Mind you, the neighboring Washington Redskins have already made overtures to Kelley and Daniel Snyder usually gets whatever he wants, other than of course, a Super Bowl title.

However, Washington was by far the most impressive receiver of the free agent group that was brought in for the recently completed Ravens Mini Camp. That group included Jerry Porter, who reportedly looked old and lazy, as well as Tab Perry (unremarkable). DJ Hackett was also invited but choose instead to try out for the Houston Texans. Washington has the size, speed and hands to be a very serviceable receiver for the Raverns. At 6'3" and 215 pounds, he has the ability to be a big target over the middle, yet the speed to stretch the field. Most of his seven year career was spent as the third option in Cincinnati behind Chad Ochocinco and TJ Houshmandzadeh. However, he did sign with the New England Patriots in 2007, although in the two years with them he only caught one pass and was used almost exclusively on Special Teams (click to read more on Washington and see this video from NFL.com). For his career, Washington totaled 73 receptions for 896 yards, a 12.3 yards/catch average and nine TD's. Nothing to make you think that the Anquan Boldin discussions are absolutely over (although I think they are), but his size, ability and experience say this might be the final piece to our receiving corp's puzzle.

To me it looks like we have the skill sets that we need from our receivers. We have the sure handed posession guy (Mason), the sneaky fast solid guy (Clayton), the stretch the field fast guy (D. Williams) and now the man over the middle guy (Washington). Of course we also have the fresh young faces that have ability and potential, yet no experience (Marcus' Smith/Maxwell, Harper, Wheelwright, Riley, etc.), but the group is the antithesis (yes, I actually used that word!) of the saying, "the sum is worth more than the parts."

As veteran Derrick Mason ages and whatever tight end becomes more of an option in our passing game, I could easily see Clayton and Washington as the main two receivers, with either Demetrius Williams or Marcus Smith in the slot. Then we will have other options in reserve who combined with the first team, is certainly enough to grab the balls thrown to them by the ever learning Joe Flacco. Most of this group helped us on the way to earning a shot at the Super Bowl, coming one game and just a few minutes away from achieving that. Did they over achieve, as some are saying and was it a one year hyped up lucky season? Something in me says that this year's team is even better and if we stay healthy, there is no reason we can't be right in it until the end. This receiving corp just got a little bit better and if you listen to Flacco and the rest of the Ravens, that's all that we needed.