Share All sharing options for: Tavares Gooden: The Next Great Ravens Linebacker 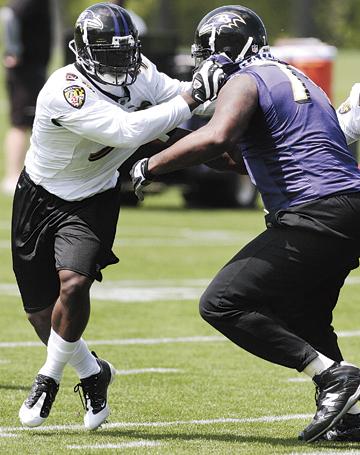 The Baltimore Ravens lost one of their outstanding linebackers, Bart Scott, to free agency and the New York Jets this off season. In previous seasons, they also lost important cogs of their defense at the same position. Players such as Jamie Sharper, Edgerton Hartwell, Adalius Thomas and now Bart Scott all came into the league as relative unknowns, but left the Ravens as wealthy free agent signings. None have lived up to the hype and success they enjoyed in Baltimore and many Ravens fans think they know the answer.

Playing next to the legendary Ray Lewis makes your job a lot easier. Teams gameplan away from the fierce middle linebacker and are always looking to see where he is on the field. Despite that, Ray is always around the ball, and that opens holes and lanes for the other linebackers to fly through and put up great stats. However, once they all seem to go for the big bucks and land on other teams as the defensive leader, they alweays seem to fade into mediocrity or obscurity.

So who's next on the list to become the best linebacker most people outside of Baltimore have never heard of? Why, it's second year pro and former 3rd round draft pick in the 2008 NFL Draft, out of the University of Miami, Tavares Gooden. Gooden was hurt most of last year and rarely got on the field, but was originally drafted as a possible future replacement for the surefire Hall of Famer, Ray Lewis. Both are from the "U" and Gooden has worked out with Ray for years, as he has been taken under the wing of the NFL great. A member of the infamous "7th Floor Crew," Gooden has even taken part in a rude, crude and lewd rap video, that perhaps one of the other readers might post, but I won't even go there.

Gooden is built to be an outside linebacker but could easily add the pounds to move inside if needed in the future. Right now, he is on the fast track to take over for Bart Scott on Ray's left side, and is making huge strides since his injuries of last year. He hasn't lost a step in speed, despite putting on extra weight for the upcoming season. He ran a 4.49 40-yard dash, faster than many receivers, so he should be able to cover the tight ends and running backs in pass assignments. Even though he's raised his weight from 235 pounds to 247 on his 6'1" frame, he hasn't lost a step.

Gooden isn't being given the starting gig by any reason, and other LB's such as Jameel McClain are not ready to step aside for him. McClain played a lot in specialty situations and actually recorded two safeties in the short but impressive opportunities he received. In addition, there is Antwan Barnes, Prescott Burgess, Brendon Ayanbadejo and rookies Jason Phillips, Paul Kruger and Dannell Ellerbe that will figure into the competition until the starter is finally named prior to the first regular season game.

Expect Gooden to be at or near the top of that list. Think about it, will Ray Lewis let a kid from his alma mater fail? Somethin in me says that just won't be permitted to happen.