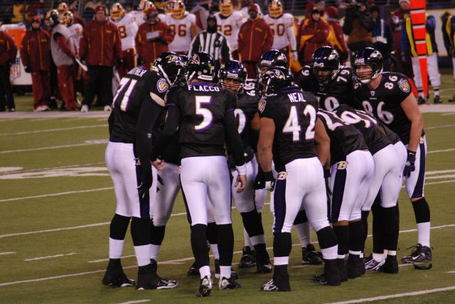 Over at fellow SB Nation blogger Blitzburgh's site, Behind The Steel Curtain (BTSC), he wrote an interesting story on the state of the AFC North's QB situation. In his review of the Baltimore Ravens and of course, Joe Flacco, he said he wasn't having anything of the national media's comparison of Flacco as the second coming of the legendary Joe Montana. Have any of you Ravens fans EVER heard anyone even mention that comparison? I haven't and after one season, the only comparison I've heard, ironically is to Pittsburgh's Ben Roethlisberger. Both were first round draft picks, both were originally not expected to play much in their rookie season but were forced into action by injuries (or illness) to the intended starters, and of course, both went to the AFC Championship Games their rookie seasons (Roethlisberger led his team to a Super Bowl Title his second year- hmmm...).

At the same time, both were never intended to carry their teams. Defense has always ruled the field for the Ravens and Steelers. Offensively, both teams were and still are based on the run game opening up the passing lanes. When either QB had to take over, the results were often not pretty. So to say negative things about Joe's first year and his future is almost like taking a shot at your own QB in Steeltown.

We Ravens fans are definitely "Whacko for Flacco," but realize that he is not the reincarnation of Joe Montana, much less Johnny Unitas (which is a much bigger compliment here in Baltimore). However, we do think we've found our Franchise QB and if we put playmakers on his side of the ball, then what we already have on the defensive side will make us contenders for years to come. At the same time, the only year I'm looking forward to right now is this one, where we will expect to have two more shots at the Steelers and make no bones about it, it will be two more wars - at least two, in 2009.

Head on over to BTSC to check out their article and join me in supporting Joe Cool by posting your comments here and over there as well!