Share All sharing options for: World Premier: "The Band That Wouldn't Die" 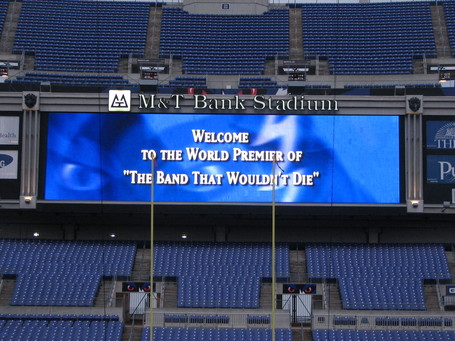 On Tuesday evening, October 6th, under a clear and cool night sky at M&T Bank Stadium, the Baltimore Ravens hosted the World Premier of film maker Barry Levinson's documentary of the Baltimore Colts Marching Band. The 53 minute film showed the 12 year timeline from the time the team moved to Indianapolis in 1984 until they became Baltimore's Marching Ravens in 1996. Almost 2,000 fans turned out and sat on the field on blankets or in the stands and watched the story on the stadium's 100 foot wide SmartVision screens. As I stepped out onto the field for the very first time, I couldn't help but notice how soft and bouncy the turf felt. Kids and adults alike were walking around and taking photos under the goalposts.
The Marching Ravens came out and played a few numbers, including the old Baltimore Colts Fight Song, to which a bunch of fans seemed to know every word of the song. 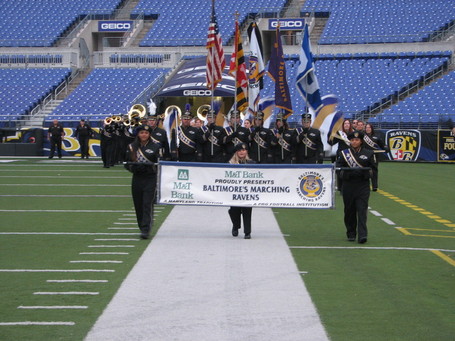 After the band finished playing, they put their instruments away and walked to their seats in the stands to polite lingering applause from those in attendance. I stood next to Bobby Nyk, a huge fan, radio host and deejay who was there in a white blazer with his likeness screenprinted on the back. We spoke about the Ravens Super Bowl victory, when he helped host the all day and all night party in Tampa at Whiskey Joe's and actually remembered me holding my sign that said "Will Trade Wives For Two Tickets" that ended up gettting my wife real mad at me when she heard about it being on television from her sister and friends.

(More on the "World Premier: 'The Band That wouldn't Die' after the 'Jump')

Included in the crowd were past and present members of the Band, including Bill Brubaker, the oldest living member of the Baltimore Colts Marching Band. The Ravens were kind enough to grant me full access to the festivities and I had a moment before the show started to chat with Bill and here is a few excerpts from our conversation: 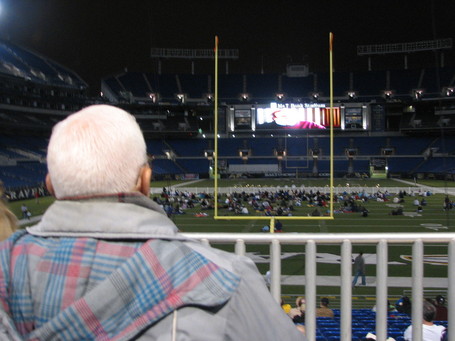 Baltimore Beatdown (BB): Excuse me, Mr. Brubaker, my name is Bruce Raffel, I do a blog online at BaltimoreBeatdown.com and the Ravens invited me to come down here tonight to cover the festivities. It’s my understanding that you’re the oldest living member of the Baltimore Colts Marching Band?

BB: What does it feel like to be in a stadium like this, as evidence of what you started out in?

Bill: It’s fun, it is. It’s really great, because I went to the first meeting of the old Colts band back in 1947 and I was already 26 and having played in high school, I wanted to be a part of it.

BB: What instrument do you play and how long did you play for them?

BB: So if you played with them through 1967, were you in New York for the 1958 Championship Game?

Bill: Oh yeah, it was in my friend’s drum that we hid the ball they kicked the field goal to tie the game before it went into overtime. We were sitting right there and it was great to see that hole open for Ameche. The fans were trying to throw things down our base horns and other things.

BB: So what you’re saying is that even back then the New York fans were crazy?

Bill: Oh yeah, I had a chance to talk to the young Rosenbloom years later, whose job it was to gather the balls up after the game to take to the locker room and he said they were hitting and kicking him.

BB: Well congratulations on being here to see this film and for taking the time to talk to me. 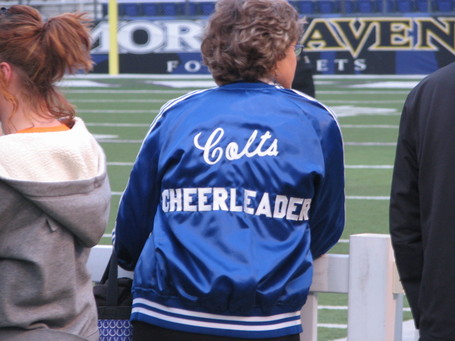 The crowd watched the show in total silence, from the time the team left in the middle of a snowy night to the time the Marching Ravens were born. including the time period without any team to play for, through the USFL, the CFL and finally the NFL's return to the city.  Lots of tears were seen rolling down the cheeks of the old timers, as the emotions of this story still run high for those who experienced it, be you a current or former band member or just a football fan. As Michael Olesker said in the film about the 1958 Championship Game and losing the team 26 years later, "That one game saved the league. How dare you turn away from us now!?"

NOTE: ESPN will air the documentary on Tuesday, October 13th at 11pm. Check your local listings and be sure to watch it in its entirety, as you will not be disappointed.