How to beat the Miami Dolphins

Share All sharing options for: How to beat the Miami Dolphins 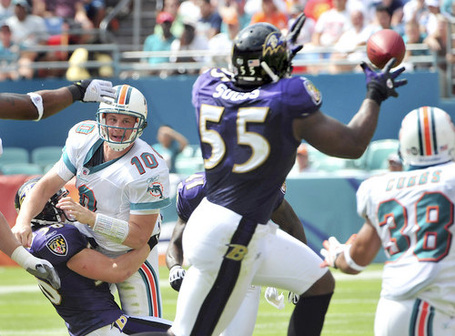 This post is sure to rile up the Dolphin fans, but I'm sure they don't need any more motivation to beat us after all the trash that's been strewn all over this and their blog in the past week. Both teams will be ready as will their fans. There are a ton of Ravens fans heading to South Florida this weekend and count this blogger among them. I just booked my flight and have score a couple of ducats to the game. The Baltimore Ravens sent emails to Club Level PSL Holders saying that they were given additional tickets and did we want them. If this game has anywhere near the number of purple jersey wearing Ravens fans that were at the October game, then this will be close to a home game for the Ravens, and we will be able to hear the cheer, "HEEEAAAPPP" every time Todd catches a pass.

Anyway, even if this is a game in enemy territory, it is ironic that Ravens rookie QB Joe Flacco has better stats on the road than he does at home. Either way, we were 6-2 at home and 5-3 on the road, so this team is not afraid to be the visitor. We all know the Ravens won the first game in week seven, but also know that was a long time ago. The Dolphins are a much better team then they were then, but so are the Ravens.Therefore, what do the Ravens need to do to come out of Miami with the victory? The answer is still pretty much the same thing as they did in October, regardless of either teams' improvement. Run the ball with authority, control the time-of-possession and take advantage of the take-a-ways if they occur. The Dolphins protect the ball as well as anyone in the league, while the Ravens take it away just as well, especially in the interception department, where they lead the NFL in that category. Interceptions are much more important than fumble recoveries, as they are usually advanced past the point of take-a-way, while fumbles are usually recovered on the spot. The Ravens also have the distinction of being able to score points on the defensive side of the ball, which takes pressure off the offense, even though they have not needed it this year. However, if they want to win this game Sunday, they will need to play mistake-free ball, or better hope for the game changing turnover similar to what happened in their first meeting.

The Dolphins prefer to manage the game and control the clock like the Ravens. They employ a duel headed RB approach with both Ronnie Brown and Ricky Williams getting the most touches, with Brown the feature back. The Wildcat formation has been successful for them, but I don't expect it to be a factor just like it wasn't the first time. The running game will not be the difference in theis game, at least not for the Dolphins. Other than the New York Giants, and that was basically on just three long runs, no one has ran against the Ravens for years now, and the Dolphins just will not break that streak. However, the Ravens must be able to break down the Miami run defense, whether it starts in the first quarter or in the fourth when we are trying to protect a  lead, a la the Dallas game.

That leaves the passing games to dissect. The Dolphins were able to rack up almost 300 yards against us in week seven, although most were late in the second half when they were in a catch-up mode. However, they seemed to take the same angles as the Titans and Colts, which was to throw the short, over the middle crossing slants to their tight ends and RB's out of the backfield that our LB's couldn't keep up with. To me, that is our Achilles Heel on defense. If Pennington wants to throw downfield, over the middle deep or try to break down our secondary, it will be a long day for him. He is very accurate but his arm is just up to the standards that can put the ball between our defenders at the longer distances. If he tries that, then we will ge those turnovers I mentioned earlier. If he sticks with the shorter crossing routes, then he has a chance to be successful.

On our side of the ball, Flacco needs to continue his amazing education thus far. He needs to be protected like he has been lately and even though the Dolphins sacked him three times in the first meeting, they protected him pretty well the rest of the game which led him to his season best QB rating of around 120. If he has time this weekend, he will find the open receivers, be in the always reliable warrior, Derrick Mason, or the clutch deep threat Mark Clayton, as well as the big guy over the middle, Todd Heap. Hopefully the Ravens will have rookie Ray Rice to catch passes out of the backfield and make things happen with his deceptive quickness. This Ravens offense is not your father's Ravens offense, as it can score from anywhere on the field, evidenced by the number of big plays, including a bunch of schoolyard-type trick plays drawn up in the dirt by the creative Cam Cameron.

However, it is no secret that it all starts with the running game. The Ravens are near the top of the league in this category with their three-headed approach. Both Willis McGahee and Le'Ron McClain have had huge games this season and can break out the big gainer at any point. Teams have tried to beat us by shutting down what they know is coming but still have not been able to stop those big guns up front from opening gaping holes for our backs to run through. The Ravens stubbornly stick to their gameplan, although they know Flacco can and will air it out as needed and with great success. Sooner or later, they know the pounding will wear down the defense and the yards pile up while the clock winds down.

As long as the aforementioned continues, so will the Ravens season. If for whatever reason, the Dolphins defense steps up and combined with offensive success and the possible mistakes by the rookie QB, then they do have a chance to win this game. However, the experts see it as a Ravens victory, and the public agrees, as the line has now moved from -3 to -3.5 as more money is being bet on the Ravens. To be a road favorite is a huge advantage, as that line would swell to around -7 if the game was in Baltimore. However, it is a playoff game and we all know that anythig can happen once the post season commences. Let's hope both teams play to their capabilities and we have a great game. If they do, look for a Ravens victory and a continuation of the season and a rematch with the Titans.

That's how to beat the Dolphins. GO RAVENS!!!