Share All sharing options for: Steelers @ Ravens: Unleash Them!

"Unleash them." My favorite line from the beginning of the movie, Gladiator, when Russell Crowe sends his men to finish off the enemy. This is what is going to happen when the ball comes off the foot of the placekicker to finally start this epic contest.

Both teams will be unleashing their hard hitting defenses and the offenses better keep their heads up at all times. You will hear the crunches throughout the stadium and even your TV set and the ambulances better be lined up all around the outside of M&T Bank Stadium. The victor may end up being more of a survivor than the winner. I can't think of any game that seemed to be on the verge of such a war as this game seems. All week, we've been talking about this game and the crescendo has now risen to the near deafening roar that will erupt from the stands when Ray Lewis emerges out of the fog from the Ravens tunnel, surrounded by flames while 70,000 fans goes practically insane! When he picks up that grass and does his dance, the true meaning of defending our turf will be obvious to everyone in attendance.

Yes, this will be a game for the ages. At least, I certainly hope so. Normally, I talk about how this game will be won or lost in the trenches. Not so today, as the trench wars will seemingly be won by whomever is on defense at the time. The key to the trenches will be which offensive line holds off the other team's defense the best. Don't expect either offensive line to win the trench war, but if ours can wear down the Steelers front seven, then that will go a long way, especially in the fourth quarter. However, don't bet on it, as yards will be hard to come by today. The key to this game will not be the running or even the passing games. No, it will not be the offense or even the defense per se. It will not even be the Special Teams or even the coaching. Will the QB's make the difference in today's game? No, it won't even be the QB's alone that will determine the victor. Today's game will be decided by the one thing both teams want more than anything else. The pigskin covered football. Yes, I said it, the ball.

What the hell has finally cracked in his skull, you say, laughing and shaking your head in pity? Nothing, hear me out on this wild thought. Both defenses are going to get after the ball. Both offenses are going to be desperate to move the ball. Something is going to have to give. What is it going to be? Who is going to crack and make the first big mistake that sets the tone of the game and ends up deciding its outcome? Why, the ball, of course. Let me explain and you will understand the truth about why this makes perfect sense.

The offenses of both teams will make an attempt to move the ball on the ground. The Ravens will probably stick with it longer, as they are more stubborn and believe that since it has worked against other teams when they stick with the run game, they wear down opposing defenses by the time the fourth quarter rolls around and we have a lead to protect. On the other hand, the Steelers have not had much success this season running the ball, even in their victories. Due to injuries to both the offensive line and running backs, Pittsburgh has relied on the short passing game to break the backs and hearts of their opponents, as Big Ben Roethlisberger has escaped certain doom over and over again by shrugging of would be tacklers only to complete the key pass that keeps the drives going and ends up eating the remainder of the clock as it winds down to victory. You've got to give them credit as it's worked ten times so far, so don't knock it.

But we digress. Back to the offenses. After it becomes obvious that the only way you're going to drive the ball downfield for any success through the air, that is when the defenses will get that glazed look in their eyes as the defensive linemen pin their ears back and the secondary looks for the right moment to pounce. The linebackers will be looking to victims to lay out while the receivers keep their heads on a swivel and their elbows close to their unprotected ribs. That is when the ball starts to bounce.

See, you with me now? The ball will be in the air a lot more than the typical game, even those involving these two teams. Normally, even the Ravens and Steelers run the ball a decent amount, and of course, their opponents laughingly try to do the same. We've all seen what happens when the Ravens and Steelers opponents have to abandon the run to play catch up with them. The balls fly through the air, some caught by the offenses, some by the defenses. Tipped balls typically end up in the defenses hands, usually after a crunching hit on the defenseless receiver. Both of these teams have become experts and coming up with the tipped ball. You all feeling me now? I expect there to be more than a few of these today, as theses defenses feast on the turnovers. Expect to see and hear the fans' collective gasps and cheers as the tipped balls either fall untouched to the ground or end up in the defenses hands.

At that point, you know what happens? The Ravens, especially Ed Reed, know exactly what to do when they become the offense after a turnover in mid-play. The Steelers are no slouches at turning the turnovers into scores, as witnessed by the Dallas Cowboys meltdown at the end of last week's contest in Heinz Field. However, make no mistake about it, the Ravens have been much more opportunistic once their defense has the ball than the Steelers.There is nothing a defensive player likes better than to become the blocker for their teammate after an interception or picking up a fumble on the run. They love the opportunity to lay out an offensive player with a blindsided block as much as they do making a crunching tackle.

So today, follow the tipped and bouncing ball, because that is where this game will be won and lost. The team that grabs it more often will be the one celebrating when the clock winds down. I fully expect the Ravens to be able to move the ball, both on the ground behind their huge package and uneven offensive line, with two tackles on the end of the line and the 260 pound running back, Le'Ron McClain behind 255 pound fullback, Lorenzo Neal, and through the air as well. The Steelrs have nothing to compare with that and even with their number one ranked rush defense, I still give the Ravens ground attack the edge. The Steelers couldn't run at home on Monday Night Football when the came back from the brink to defeat the Ravens 23-20 in OT back in week four. They won't be able to run this time either. The Ravens were able to get to Big Ben and they will do so again. who wouldn't love to see this hit again? 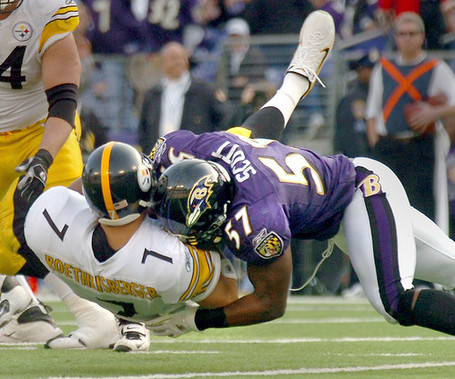 Unfortunately, you will see lots of these hits, but from both the Ravens and Steelers. Let's hope that Ravens rookie QB Joe Flacco remembers to slide this time rather than take on the defense when he scrambles. These are not the Cincinnati Bengals or even Washington Redskins, Joe. These guys want a piece of your head! Expect the Ravens pass rush to disrupt the Steelers as much as the opposite. Expect Hines Ward to try to bait the Ravens defenders into stupid penalties. But no, this will not happen today, as Ward gets a taste of his own medicine. The funny thing will be when the Ravens defense gets an interception, everyone without the ball will stop blocking and look to take Hines Ward's head off. He will hightail it to the sideline to hide when that happens, just you watch.

The Ravens will win the tipped ball and turnover battle today. Their home record and the stats you should have read in an earlier post by one of the Beatdown's contributors says it all. We will protect this house! The Ravens will create a tie at the top of the AFC North today and all but lockdown a spot in the post season, regadless of where they end up. However, after today, the goal will not just be the playoffs, but it will be the division title.

Three months ago, who'd have thunk it!